Out of sight, Out of mind, Out of Control 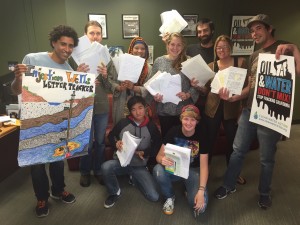 This is the third in an ongoing series on California oil and gas issues, as part of "July: Oil and Gas Month." Click here to see all the entries in this series.

Imagine you’re sitting around your house and you’ve got a few 50-gallon drums of crude oil diluted with salty water laced with heavy metals and low-level radioactive material. You’re probably thinking, “Man, I really need to do something with these drums…it’d be really embarrassing if my neighbors knew that I just had them lying around.” Don’t worry – you have options! You can have the waste taken to a hazardous waste facility for proper processing, but that means you’ve got to pick up the phone, get a quote, pay actual money; and look – you’re no oil magnate, you’ve got bills to pay. So what do you do? DUDE, JUST MAKE IT DISAPPEAR! A lot of that nasty stuff will just evaporate into thin air! It might smell pretty bad for a few days, create some low level ozone, which in turn makes more smog. Maybe some people will have some respiratory discomfort, but regardless, the pollution may be gone in a few days…or weeks. No big deal. Plus it’s wayyyy cheaper, and really all you have to do is tip the barrels over onto your back yard. Or better yet, that big empty lot by your community garden. Barely anyone lives out there.

Wait, though, people will SEE it. There’s gotta be some other way…maybe there’s some really deep hole in the ground, and maybe the government will actually allow you to dump this nasty stuff into that hole. Your buddy was talking about this the other day, some kind of Injection Well Doohicky. He said that there’s so many that no one really knows where they go, so the State is letting all kinds of things go down these wells. In fact, they don't even make you tell them what kind of chemicals you're dumping. It’s perfect! Then no one sees the nasty waste – it’s like there’s no trace. PLUS it’s way cheaper than properly disposing of it. Done and done. Off to the injection well you go!

Seem crazy? Perhaps irresponsible? Does the phrase “bad neighbor” come to mind? Well, it turns out that the Oil Industry in California deposits a significant amount of their toxic waste water into open-air, unlined pits or injects it into aquifers using thousands of illegally permitted wells, which are injecting directly into potential sources of drinking water. For some reason, the State decided to allow Big Oil up to two years to figure out whether or not these aquifers should be protected, all the while allowing more injection to occur.

This is absolutely unacceptable, but we have been taking action. Clean Water Action’s Field Canvass has been mobilizing our members door-to-door, face-to-face to collect over 500 handwritten letters to Governor Brown and the Department of Conservation to shut these wells down immediately. Additionally, our Phone Canvass has generated close to 1,000 electronic messages from our members as part of the 45 day comment period.

We know, from knocking on doors and making call, that folks across the state are outraged. Here we are, in our fourth year of drought, with at least 60% of our state’s drinking water coming from groundwater, and the oil industry gets a free pass to foul what little water we have. Today, we are hand delivering these little pieces of political outrage directly to those responsible for this regulatory failure. If you met one of our fearless organizers at your front porch, or took a call one evening this month, and we moved you to write a letter or send an e-mail, thank you. Rest assured that we’ll be using your voice to make change that’s long overdue and we won’t rest until we turn failed oversight into effective corporate accountability.