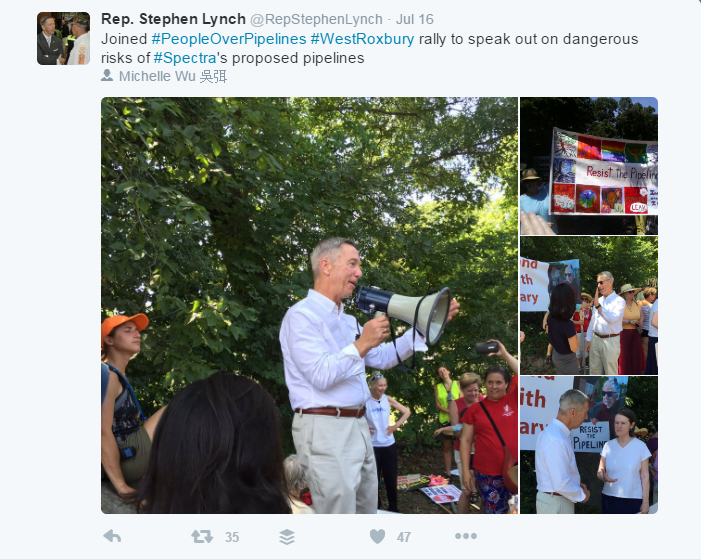 Writing in the Boston Globe just a few days ago, Karenna Gore - Director of the Center for Earth Ethics and daughter of former Vice President Al Gore - stated that "[T]he oil and gas industry is now an empire that makes its own rules." I couldn't agree more. But the tough questions that are being asked not only in print, but in public protest and in the halls of power, are exposing the incredible reach of the fossil fuel lobby and fueling the popular movement fighting to shut down polluters' lock on our society.

In Massachusetts and nationwide, we're witnessing a mix of laws being bent, broken, or simply put to bad use to bolster the profits of fossil fuel companies, ignoring threats to our health, safety and environment. An effort to a subsidize gas pipelines such as Spectra Energy's Access Northeast project is proceeding at the Department of Public Utilities despite massive public opposition. Unfortunately, this "pipeline tax" is far from the only absurdity facing residents of the Bay State. Recently, it was revealed a contractor conducting an environmental review of another Spectra Energy pipeline - Atlantic Bridge - had a preexisting business relationship with the gas company. Senators Warren and Markey took objection to this apparent conflict of interest, but the federal governing body with oversight around pipeline projects, FERC, reiterated that it did not see an ethical issue with the arrangement.

In West Roxbury, where Ms. Gore took action to protest the unchecked growth of fossil fuels, Spectra is constructing a third pipeline project, the Algonquin Incremental Market (AIM) expansion, that will run directly by an active blasting quarry. The high-pressure, 750 pounds per square inch (PSI) pipeline has been justified based on estimates for unprecendented and almost unfathomable growth in gas demand for the Boston area that might well be alleviated through greater efficiency, fixing gas leaks, leveraging non-gas heat sources like cogenerated "green steam" and a shift toward electric appliances. When fully constructed, AIM would pressurize an aging and brittle gas distribution system, increasing the volume of leaked gas in the process and potentially elevating other safety risks.

Despite these grim signs, I wake up with a lot of hope about the movement to quit fossil fuels once and for all. It isn't because I'm a born optimist - far from it - but rather that I see the incredible commitment of so many people working to fight for their communities, for a better quality of life and for the survival of future generations.

Recently, residents of the state marched 43 miles to protest Access Northeast. Activists on the South Shore and South Coast were joined by a contingent of anti-pipeline crusaders from the Northern and Western reaches of the state who had made a similar trek two years prior to defeat the now-cancelled Kinder Morgan Northeast Energy Direct pipeline. To restate that: communities that had already defeated a pipeline joined their neighbors in other parts of the state because they recognized the common struggle. Other residents of New England, facing gas pipeline and power plant projects in Sandisfield, MA and Burrilville, RI, held solidarity marches and rallies.

The Massachusetts Senate has spoken clearly on energy, passing legislation to prohibit the pipeline tax and, beyond that, stating clear opposition to gas pipelines based on the stark risks such projects pose to our enviroment and safety. And I am confident that, despite the incredible wealth and power of the opposition, we will continue struggle after struggle in the short term as we build for long-term victories that literally amount to saving our future.

Of course, the most important cues we can take are from below, but politicians listen to stirrings from the ground, and change follows. With enough popular pressure, we can transform our political system so that we can build the energy system we need. I do think, though, that Congressman Lynch phrased it perfectly when he joined the People Over Pipelines march in West Roxbury:

All I can say is that we have to keep on fighting. And if we just keep at it, like a dog on a bone, we will win. #PeopleOverPipelines

All I can say is that we have to keep on fighting.