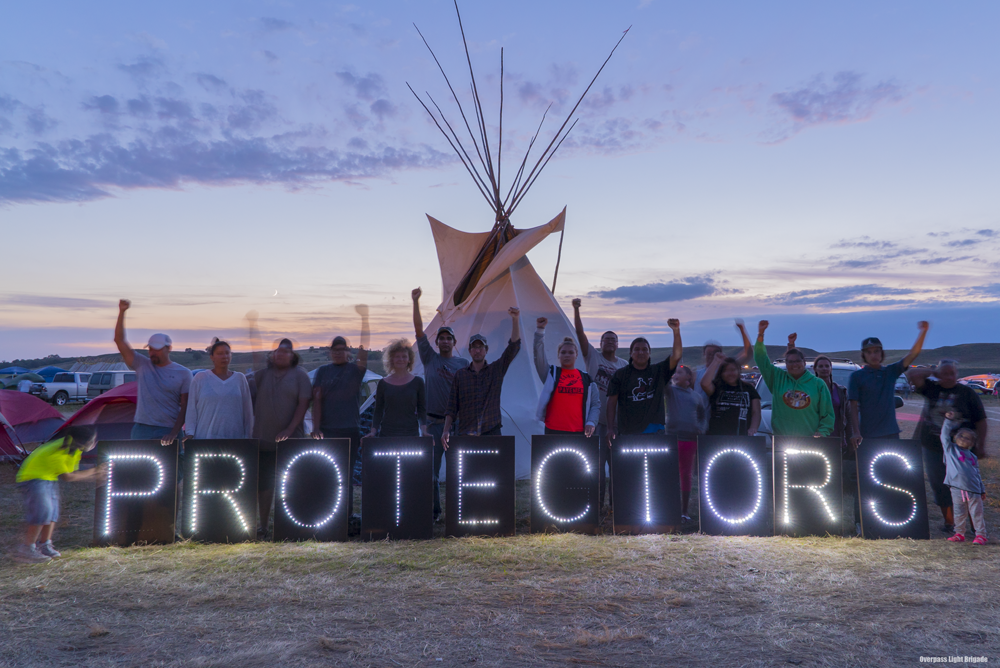 Standing up to Big Oil: stopping the Dakota Access Pipeline

In a stunning turn of events, the federal government temporarily stopped construction of the Dakota Access Pipeline (DAPL), only minutes after a federal judge denied the request by the Standing Rock Sioux Tribe's to do the same. Permits to allow construction on federal land will not be granted until previously issued permits are reconsidered.

Some are saying, the effort to stop the DAPL is unprecedented: thousands of native activists, from over one hundred tribes, from all over the country and beyond, gathered at a series of camps along both sides of the Cannonball River in North Dakota; teepees, tents, horses, four-wheel drives, flags, banners, a convergence of great energy to protect the water supply from the almost inevitable contamination from an 1,100 mile oil pipeline and the destruction of cultural sites Here's a great video in their own words.

The DAPL has been horribly managed: original government approval provided in a fast-tracked process; DAPL Environmental Assessment (EA) lied about input from the Standing Rock Tribe and the American Council on Historical Preservation by saying the project "avoided culturally significant sites;" the EA claims the project will have "no direct or indirect impacts," despite the pipeline passing underneath the Missouri River, the major source of drinking water for 18 million people, other impacted tribes, such as the Iowa Tribe and the Osage Nation, were not consulted as required by law; the Homeland Security Department, which had provided drinking water to the camps, removed water tanks and trailers; DAPL bulldozers plowed a two-mile long, 150-foot wide path through a Standing Rock Tribe sacred burial ground; and DAPL security attacked activists with dogs and pepper spray.

The temporary halt requires that the federal government will determine with tribes how “to better ensure meaningful tribal input into infrastructure-related reviews and decisions and the protection of tribal lands, resources, and treaty rights.” The deplorably-managed project and tremendous local, national, and international public pressure seems to have compelled the federal government to, at least temporarily, do the right thing.

The federal decision is greatly welcomed. It remains to be seen, however, what the broader impact will be on the DAPL and other projects. The fight is far from over.