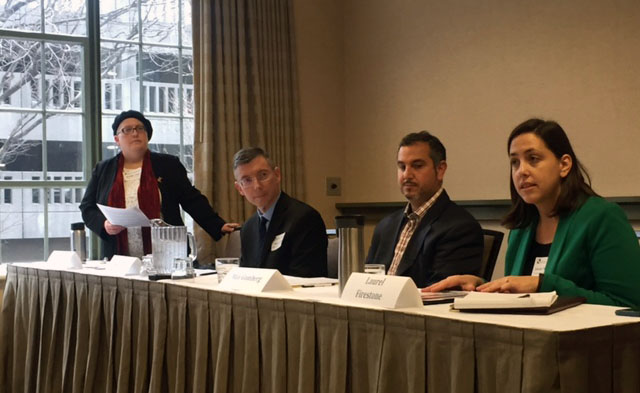 The problem being discussed: There are more residents in California whose drinking water standards are failing than the entire population of Flint, Michigan.

You can take action here now to join us in making the call for the state to create a fund to address the problem.

Max Gomberg from the State Water Resources Council, which last week released a map showing the 300 communities in California without access to safe and affordable drinking water, said the issues of safe and affordable drinking water could cost around $645m a year to fix, although his agency is still looking at the numbers and they aren't even tracking some of the important data, for example, the number of Californians who aren't formally served by a water system, and who are more vulnerable to these issues.

"This is a big deal, and it's a heavy lift. But we have the mandate to do it, we have the support of the administration to do it," Mr. Gomberg said. "It's really at the top of our priority list as a state agency because it means so much in terms of climate, equity, and the state of California."

This morning's event follows a standing-room-only briefing last week for legislative staffers on the issue, which we blogged about here.

Laurel Firestone with Community Water Center reminded the audience that the problem is pressing. "Low income communities and communities heavily populated by people of color are disproportionately affected by these issues," Firestone said. "Community members are choosing between paying their water bills and other basic necessities. This is unacceptable."

"We believe that some significant reform is needed to do what they think is the right thing for their customers," said Brad Coffey from the Metropolitan Water District.

The panel discussed possible solutions to the problem including a public goods charge, and general fund expenditures.

"The challenge is, we need a reliable source of funding that small systems throughout the state can utilize to run the treatment plants they need," Firestone said. "

The Green California Summit, organized by the California League of Conservation Voters, is a chance for environmental organizations from across the state to come together and discuss how to effectively lobby for our legislative priorities in Sacramento, the state's capitol.

The title image at the top shows the panel participants from left to right: Jennifer Clary with Clean Water Action, Brad Coffey from the Metropolitan Water District, Max Gomberg from the State Water Resources Control Board and Laurel Firestone with Community Water Center.