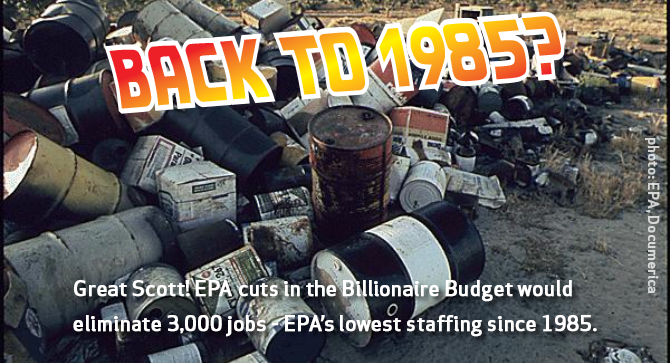 Yesterday, EPA Administrator Scott Pruitt testified before the House Appropriations subcommittee in support of the Trump Administration’s 2018 budget proposal. The 2018 budget, if Trump and Pruitt get their way, would cut EPA’s budget by a dramatic 31%, reducing funding levels by $2.6 billion - all under the guise of bringing the agency “back to the basics” of protecting clean air and water and shedding excess spending. But the math just doesn’t add up to a healthy future.

EPA is already underfunded, suffering from years of budget cuts despite its crucial role in protecting all of us. Further reducing EPA’s budget would severely limit its ability to protect our water, air and climate. The proposal calls for slashing grants to states to carry out their environmental and health protection programs. Drinking water, the lifeblood of every community would be put at risk by deep cuts to programs that protect the sources of drinking water, as well as critical funding and assistance that public water systems need to provide safe, clean and affordable water.

When pressed, Pruitt stated that EPA would be able to do its job, with statements like, “We will continue to partner with states to address sources of drinking water contamination.” Later in the hearing he added, “the EPA has a very important role to play…There are water issues that cross state lines.”

But the budget he is pushing disagrees with these basic principles. It reduced funding for states, and it reduces EPA’s role in protecting water. It proposes to eliminate the entire $164 million budget for the Clean Water Act program (Sec 319) that deals with non-point source pollution from sources like agriculture and other runoff. The proposal also calls for the elimination of geographic programs like the Chesapeake Bay, Puget Sound, San Francisco Bay, and the Great Lakes restoration efforts. It also proposes a 30% cut the Underground Injection Control (UIC) program, which provides funding to states to protect groundwater from oil and gas and other injection wells. Add in a $30 million cut to the Public Water System Supervision (PWSS) grant program, and it is clear that protecting drinking water, from the source to the tap, whether by states or the feds, is not a priority for this Administration or this budget.

Those are just a few examples of how bad the Trump/Pruitt budget would be for water. We dug a little deeper and analyzed the numerous water programs that would be slashed by this proposal and it’s not pretty. Click here for our full analysis.

And if you agree with us that EPA water programs must be funded, click here to take action!