Solar energy is an incredible resource for Massachusetts, with approximately 15,000 jobs and 1600 megawatts of installations powering the Commonwealth's economy and clean energy future. This puts the Bay State in the top 10 for megawatts of solar installed across the nation—yes, dear Florida, we’re beaming right past you.

But Massachusetts’ solar industry has thrived because our state has chosen to support clean energy and growth has come in conjunction with strong policy as well as the falling cost of photovoltaic energy (PV). We’ve even innovated new solar programs to expand access to those who can’t put panels on their roofs, empowered municipal leaders to combat “energy inequality” and helped critical service providers save money—though there’s much more work to do to ensure solar works for all communities, including renters, low-income people, urban communities and those who lack adequate credit.

As we move forward to determine a new solar policy framework, it’s worth looking back in time to remember just how we got here. Although the foundation of solar policy goes back decades, the most notable shift came after the 2008 Green Communities Act. Prior to implementing the GCA, which greatly expanded a solar policy—really, a billing mechanism—called “net metering,” Massachusetts had fewer than 20 megawatts of solar. (Actually, as former State Senator Downing notes, it was more like two megawatts of solar back in 2007.) In the subsequent decade, Massachusetts has developed 80x more solar, but the industry today is running into a series of stark challenges and policy barriers. 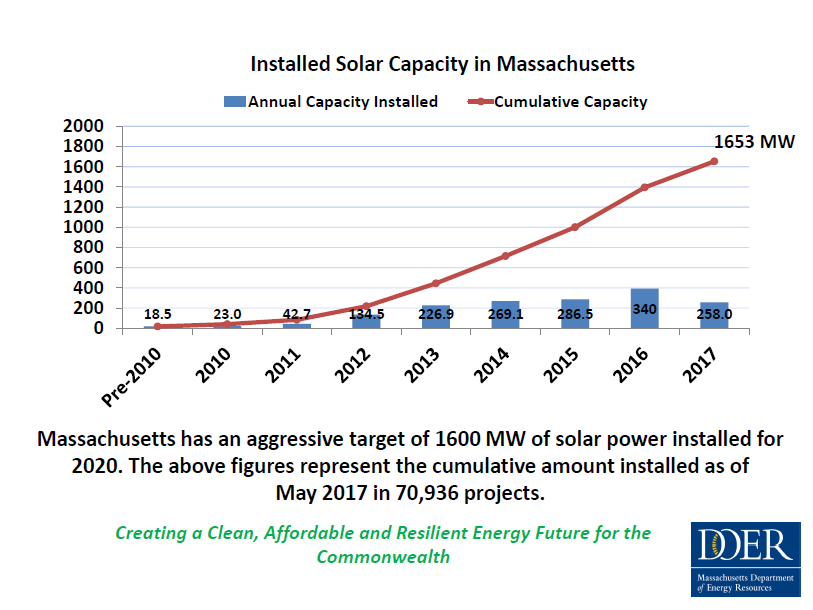 Does this “net metering” thing sounds wonky? In its basic form, net metering just means you can send energy back to the grid and get paid for it. At “retail rate,” net metering is comparable to what you pay for energy you use. (Scroll to the end of this post to learn about one Massachusetts entrepreneur's role in innovating net metering.) 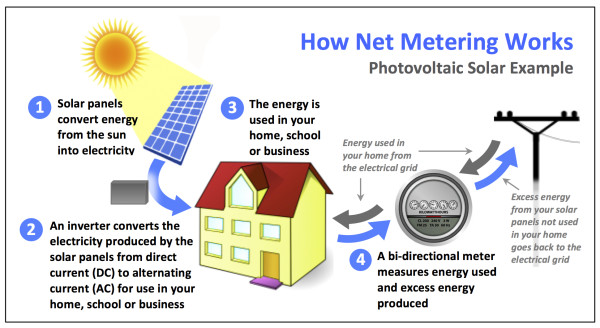 Importantly, net-metered solar isn’t taxable income and benefits are seen on the bill as opposed to in the form of a cash payment, making it a crucial component of solar for many stakeholders, including low-income residents whose federal and state food or housing benefits can be affected by changes in income.

Unfortunately, today, both the solar industry and efforts to promote equity in access to solar face several major challenges. In 2016, a new Massachusetts law cut the value of solar energy paid through net metering to solar customers substantially. While a huge public outcry saved solar compensation for municipal projects, the new law means that renters who buy into community solar projects (freestanding solar installations off-site, often called shared solar “gardens” or “farms”) will receive at most 60% the compensation that a homeowner with a perfect roof receives. Because of how community solar projects are structured, often with a few large anchor customers in addition to their small residential or commercial customers, that compensation will likely fall far below the 60% level.

What are the consequences of cuts to net metering? Well, for one, the inspiring interfaith solar projects featured in this blog post and video nearly collapsed. At the end of the day, the projects did move forward, bringing many congregants into the clean energy movement. Yet the churches were forced to cut down the size of their projects, which were originally intended to create additional savings for residents in the surrounding neighborhoods.

Clean Water Action is fighting for state legislation filed by Sen. Chang-Diaz, Rep. Holmes and Rep. Dubois (S1831/H3396) to change the inequities in our energy policies and ensure low-moderate income residents and renters won’t be boxed out of solar, and we expect public hearings on that legislation in Fall 2017. Additionally, CWA is working with Sen. Eldridge and Rep. Mark (H2706/S1846) to accelerate our transition to clean energy and expand solar.

A rate proposal by Eversource, currently being debated, would hike rates while also greatly reducing the value of solar, including for municipal and low-income solar. It would also add significant fees to solar, some of which specifically target “offsite generation”—i.e. community solar projects that expand access to clean energy.

It’s normal for utilities to have their rates reviewed before state regulators, in our case the Department of Public Utilities. But Eversource’s anti-solar rate hike is just greedy. The Attorney General opposes Eversource’s rate proposal, and Clean Water Action and our Green Justice Coalition partners do too. The Department of Public Utilities should reject Eversource’s massive rate hike and fees on solar, while creating a pathway for provisions to accelerate grid modernization and electric vehicles to move forward.

(Interestingly, Associated Industries of Massachusetts, a business trade association that frequently weighs in on energy and economic policy, does not appear to be contesting the rate hike—one wonders, could it be because Eversource and National Grid are among its members?)

Finally, a revised solar incentive program called “SMART” will further cut back state supports for solar and introduce new barriers that inhibit low-income and shared solar projects. Solar owner or developers currently get renewable energy credits called “SRECs” as an incentive to advance clean energy, and SMART is the successor to that program. By no means it is a replacement to solar net metering, which delivers energy savings to solar customers.

Clean Water Action is primarily recommending four changes to the program: creating a carve-out or dedicated portion of the incentive to ensure low-income and community solar thrive, ensuring the overall solar incentive is high enough to support solar development, revising restrictive definitions of low-income that will leave many communities out, and reiterating the need for an "on-bill" mechanism like net metering to bring savings home. You can read a lot more about the SMART progam here from our friends at MassSolar, and don't forget to take action by contacting your state legislators and the MA DOER today!

Net metering itself has roots in Massachusetts’ solar industry. Solar pioneer Steven Strong was recently featured in a piece about net metering on the popular podcast 99% Invisible. Steven was instrumental not only in the invention of solar net metering but also in the state’s first community shared solar garden, a member-owned project in Harvard, MA.

The story is a great piece of independent journalism in that you truly hear two sides: one arguing that solar is saving all ratepayers money and the other suggesting that solar shifts costs to non-solar customers. There are grains of truth in both ideas, but the latter idea has been pushed so aggressively and so inaccurately by corporate fossil fuel interests that I once took to the pages of Commonwealth Magazine suggesting utility companies deserved a sunburn (in retrospect, my tone may have been a little aggressive).

Keep in mind the fact that local clean energy like solar has no fuel cost and can defer the construction of large, pricey transmission lines or gas pipelines. Recently, even the power grid operator - notoriously sluggish in its ability to incorporate renewable energy - has noted that rooftop solar reduces summer peak power demand and saves ratepayers money in the process. Hey, maybe we should be considering another way for calculating the value of solar energy. Of course, we all pay into the incentive programs (like SMART or SREC) that encourage solar development, and it's important to ensure that, at the end of the day, our clean energy programs serve everyone. That's what we're trying to do.