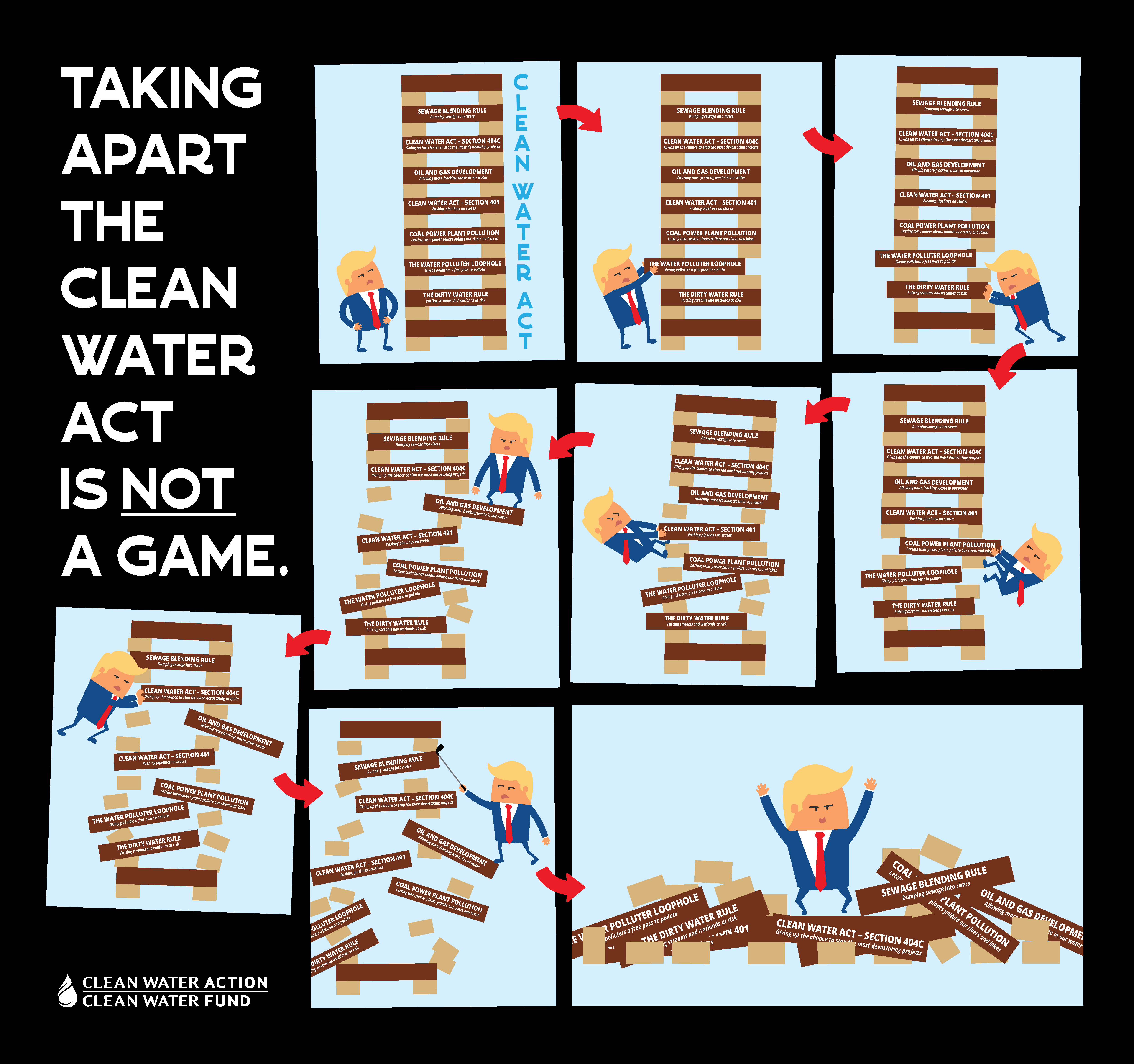 Taking apart the Clean Water Act is not a game

The Trump/Wheeler Environmental Protection Agency (EPA) is dismantling critical parts of the Clean Water Act one by one. Cumulatively these are the most serious threat to our nation’s bedrock environmental law in its history. If these administration attacks are finalized, the Clean Water Act could be severely weakened. Since the Trump administration is parceling out these assaults, it can be hard to see the full picture. So we wanted to take a step back and explain was is at stake for the rule of law, the Clean Water Act, and, most importantly, our health and the health of our water.

The Dirty Water Rule: The Trump administration is putting streams, wetlands, and drinking water sources at risk. EPA finalized the “Dirty Water Rule” in January 2020. It was published in the Federal Regsiter on April 21, 2020 and will take effect soon. This outrageous rule ignores the latest science, is on shaky legal grounds, and puts over half our nation’s remaining wetlands and thousands of stream miles at risk of pollution or destruction. Learn more here.

The Water Polluter Loophole: EPA wanst to give polluters a free pass to pollute:  On April 15, EPA announced it will no longer require polluters to get a permit for pollution that flows through groundwater before entering a river, bay, or other surface water. EPA is likely to do formal regulation to codify this change in longstanding practice regarding groundwater pollution that reaches surface water. Learn more here.

The Toxic Water Plan: Coal-fired power plants are the nation's largest toxic water polluter. EPA"s proposal would let them dump even more waste into our water by weakening the pollution limits for toxic water discharges. This pollution is known to impact rivers, lakes and bays including drinking water sources. It includes contaminants known to impact water quality and drinking water safety, including metals like arsenic and cadmium as well as hexavalent chromium and nutrients. This water pollution from coal plants is in addition to the pollution caused by weak requirements for disposal of coal ash waste. The administration is also watering down these already in insufficient requirements. EPA held a comment period on the Toxic Water Plan from December 2019 - January 2020.  Tens of thousands of people submitted comments in opposition to this giveaway to corporate polluters. Learn more here.

Clean Water Act Section 401: EPA wasts to make it harder for states sand tribes to protect local water quality from fossil fuel infrastructure, pipelines, and other big projects on States: Section 401 of the Clean Water Act that gives states and tribes the ability to review large projects to certify they won't damage water quality. States and tribes can ask for changes to the project to safeguard water or (rarely) veto the project entirely. Because some states have recently used this section of the Clean Water Act to block pipelines and liquid natural gas (LNG) export terminals, the administration wants to limit the time states have to review proposals. This Executive Order focuses on NY and OR have used recently to block pipelines and LNG terminals, respectively. EPA held a comment period for the public in the fall of 2019. Clean Water Act members submitted more than 12,000 comments in opposition to this outrageous proposal. Update: In April 2020, EPA sent a final version of this rule to the White House Office of Management and Budget for review.

Clean Water Act Section 404(c): EPA could give up its chance to stop the most devastating projects. Often known as EPA's "veto authority," this section of the Clean Water Act empowers EPA to deny or revoke permits for certain projects that would normally be granted but for which EPA has determined there will be an adverse impact on water supplies, fish, wildlife or recreation. EPA has used this authority only about a dozen times. Before he left office, EPA Administrator Scott Pruitt set in place a process for EPA to formally give up its own authority to stop extremely dangerous projects

Sewage Blending Rule (aka Dumping Sewage into Rivers): EPA is considering whether to loosen sewage treatment requirements when extreme weather events overload wastewater disposal systems. This could result in partially treated sewage being “blended” into treated wastewater and discharged directly into rivers, lakes, and bays.