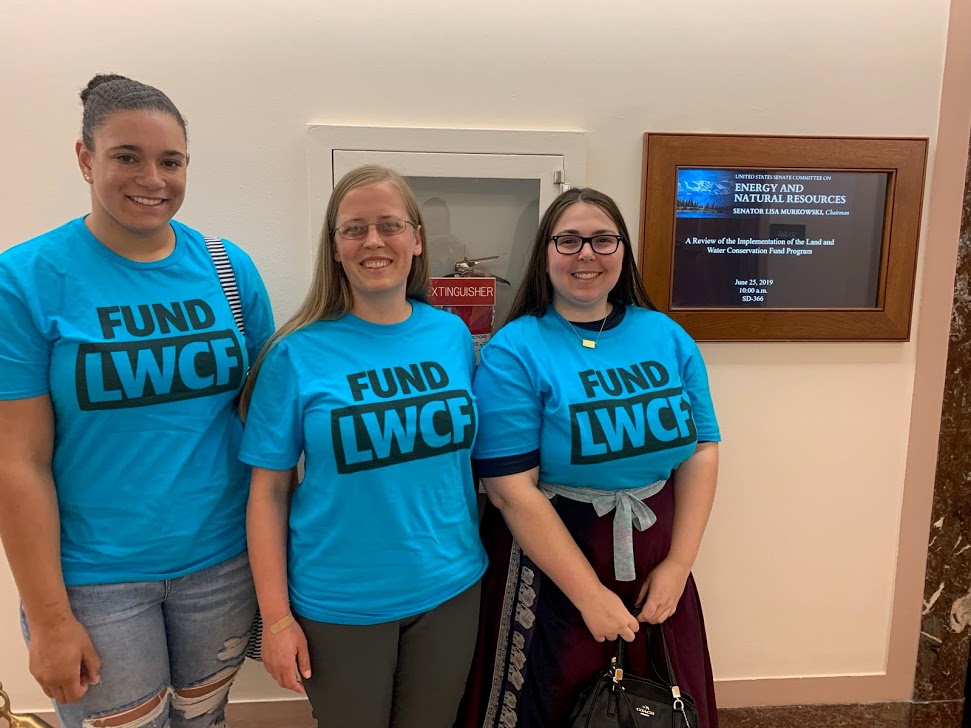 Senate, Save the Land and Water Conservation Fund!

Last week, the Senate Energy and Natural Resources Committee held a hearing on the Land and Water Conservation Fund, and Clean Water Action's Baltimore team traveled to the hearing to stand up for public lands. Armed with leaflets about the importance of LWCF - a popular, bipartisan program to ensure that we all have access to the outdoors - we rallied outside the Capitol then attended the hearing as Department of the Interior staff, representatives of state officials who utilize the Land and Water Conservation Fund, and advocacy organizations agreed about the critical importance of LWCF but disagreed about how it should be used and why, if it's so critically important, the Trump administration requested that $0 be allocated for it each year. You can watch the whole hearing here, and follow along with our live tweets from the hearing room below:

We're on the Hill today to fight to fund the Land and Water Conservation Fund! This important federal program ensures that we all have access to the outdoors. We need permanent dollars behind the permanent authorization of LWCF! #FundLWCF pic.twitter.com/rYeNO0AS6q

When I found out I would be going to a senate hearing for the Land and Water Conservation Fund, I didn’t know what to expect. I knew that the witness from the department of the interior would probably be underinformed and that some of the senators on the committee would most likely not be in attendance. What I did not expect was the level of apathy that would come across from senators being absent. I did not know that senators aren’t required to attend the entire hearing of their committee and are instead welcome to come and go as they pleased. What resulted from that was a near-constant repetition of questions, as senators who came in late did not know what their colleagues had already discussed with the witnesses.

As for the department of the interior, one moment that stood out to me the most was when DOI Assistant Secretary Susan Combs was asked how much money the DOI had requested in their budget for the LWCF this year, and responded “zero, we requested zero for the LWCF,” despite spending minutes prior waxing poetic about how much the current administration cared about conserving outdoor spaces. Senator Heinrich then responded, “What should I have my constituents believe, the flowery words [about the LWCF] or the zeros?” For me, this showed the clear disconnect between the heads of the DOI and the lands that they are meant to protect. I can only hope that in the future the department is run by those who truly care about protecting the outdoor spaces that bring comfort to the citizens of this country, and am grateful that we seem to have senators who understand the importance of being outdoors.

Traveling to DC and attending the fall committee hearing to review the Land and Water Conservation Fund program was such an amazing experience and I really learned a lot. It is important that this federal program receives funding for improving wildlife habitats and public lands all across the United States, along with supporting the outdoor economy and jobs. $0 was requested for LWCF, which is shocking when this program is necessary and needed. As a National Association of State Outdoor Recreation Liaison Officer Lauren Imgrund said, "In our growing country, the need for places for kids to play, communities to gather, and all of us to enjoy the great outdoors is increasingly important."

My first hearing at the Senate building was eye-opening. It was enlightening to learn that both sides of the aisle can hold similar views when it comes to protecting our public lands and parks. I appreciate the folks who take a non-partisan stance on such matters, that clearly matter to all of us.

Some may say “that’s just the way it is,” but I was very distraught at the coming and going of the senators throughout the hearing. If this is how all hearings go, then these senators are missing a lot of important dialogue, and I couldn’t help but think “No wonder nothing gets done!” A few of the senators stuck around longer than others, and this reflected in their speeches. The senators who showed up around the last few minutes of the hearing simply missed most of the hearing, and would often repeat concepts or questions that had already been mentioned or addressed. How could these senators have anything of value to say if they did not make the time to hear the panelists speak?

Aside from these distracting logistical issues, I enjoyed listening to everyone speak. I loved hearing the personal and professional stories from NWF and others who were present and advocating for LWCF funding. They provided the raw reasons for wanting to protect this land. They mentioned fishing, hunting, hiking, etc. In addition, many of the senators mentioned the importance of these lands for recreation, and how the Federal Government has reserved much of them reserved for intentional natural resource extraction. So it was no surprise to find out that the annual $9 million designated for LWCF was not fully or properly appropriated.

I thought Senator Mazie Hirono’s speculation of Assistant DOI Secretary Susan Combs was the most compelling. Hirono was patiently present for almost the entire hearing, and left appropriately after she clearly pointed out the elephant in the room: The DOI has designated ZERO dollars for LWCF to maintain OUR public lands and parks, meanwhile billions of dollars is needed for a wall demanded by Trump.