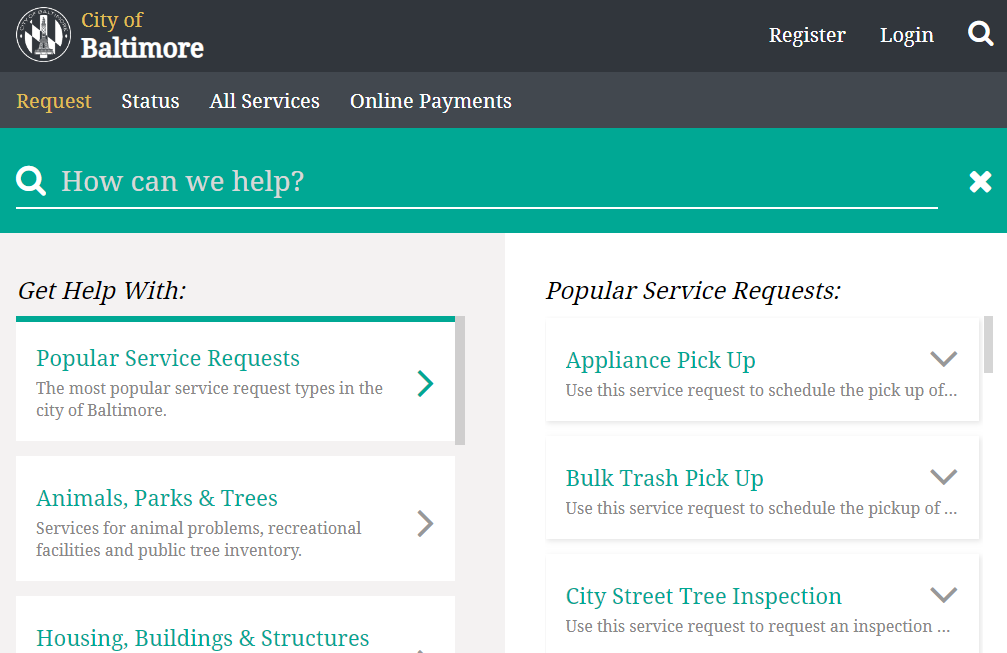 "Closed Means Closed:" the 311 system in Baltimore City and pollution

On Thursday October 22 at 2:00 pm, I attended the Baltimore City Council committee’s hearing on Bill 19-0163R, an informational hearing 311, the language behind closure of a service request, and improvement of the 311 system. The hearing began with Councilman Pinkett showing three examples of illegal dumping where the service request for them had been closed, and the site inspected, yet the garbage dumped was still present. These were exhibited as examples of a large problem in Baltimore--- service requests filed through 311 are being closed while left unaddressed. Pinkett called for the hearing and was most vocal within it, saying “Constituents think elected officials and those within 311 don’t care or are incompetent” as a result of the rampant inconsistency of service request addressal. To help shed light on 311, Lisa Allen, policy director for 311 was called to speak, saying that “311 doesn’t close service requests”, in fact 311 is used to refer service requests to other agencies in the city, such as BGE, DPW, or DOT. A problem is that many don’t know the nuance of the communication between 311 and other city agencies, leading to confusion and a loss of faith.

Lisa Allen’s statement led to much dialogue between the council committee and representatives for several city agencies, chiefly DPW, on why service requests aren’t being handled effectively. Though many competing explanations about why service requests aren’t being responded to were floated around, the most recurring among them were numbers of service requests and actual policy violations. Present DPW officials cited an 18,000 a year figure for the number of service requests handled, saying “Service requests come in at an alarming rate, the volume of work is impossible”. Cited also for a reason service requests aren’t handled was a question of whether a violation actually occurred, officials citing that, “DPW will inspect property, and if it is seen that property is inhabited and the owner can handle the issue, the SR will possibly be closed. If the property is uninhabited or a violation occurs, that’s where the work order for DPW comes in”. Department of Transportation and Department of Forestry representatives also spoke about volume of work as a concern for those agencies.

Dialogue continued with a general attitude of 311 being unsatisfactory. Councilman Kristerfer Burnett even raised the concerns of a lack of transparency on city sites, with information on openbaltimore.com becoming less detailed, such as needing other websites for critical information on service reports such as “citations and violations”. A main concern of Councilman Costello’s was reflective of ineffectiveness of communications between departments in Baltimore, using the example of an a collapsing street. “If a street surface starts to collapse [and agencies keep transferring the service request because of indeterminable cause] we [ get farther into the problem] and nothing is fixed”. The hearing ended with a tone of unfinishedness, Councilman Pinkett restating his worry about 311, “311 creates an environment of competition rather than cooperation [ no one is addressing issues even after inspection from the city]”. The committee resolved to move the motion to close the hearing at 4:06 pm. Details about the hearing, including reports from many city departments about the 311 system, can be read here.