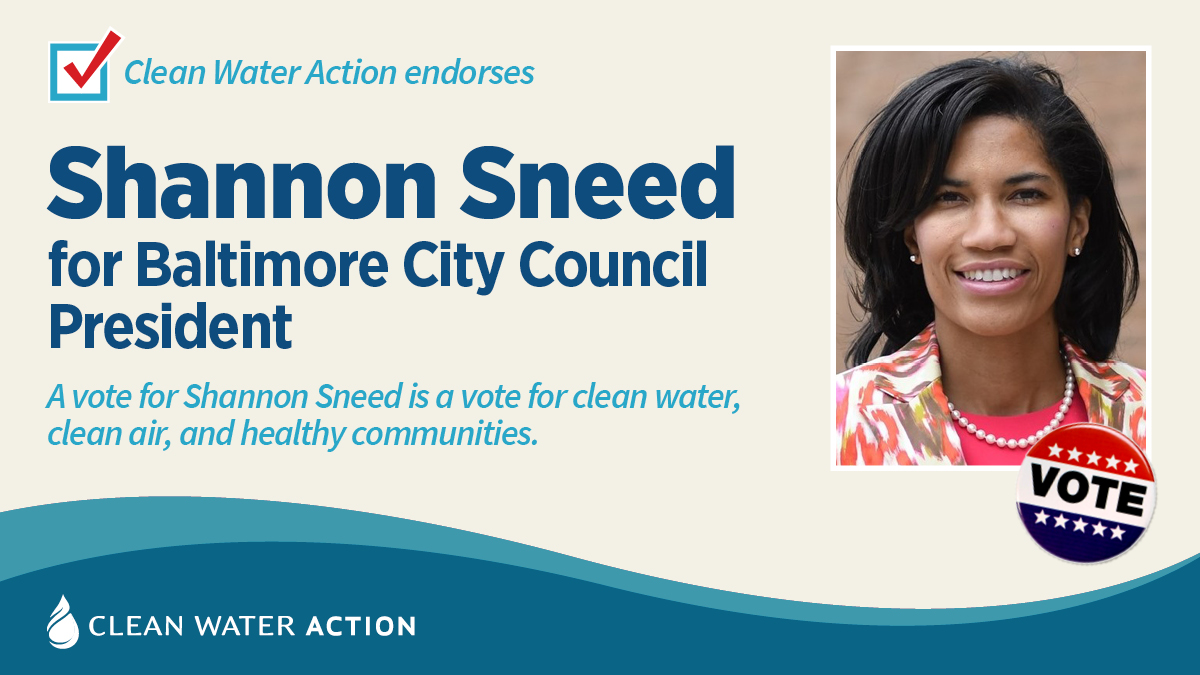 Maryland's primary election is one week from today - have you received your ballot in the mail? If so, don't forget to mark it in black ink, and sign and date the back before sending it in! If not, it's not too late to make sure your voice is heard - you can download and print a ballot here by Friday to vote by mail, even if an absentee ballot was not mailed to you.

Our team has been busy at work, making calls to hundreds of CWA members like you in support of our endorsed clean water candidates. Last week, I emailed you about why we're endorsing Brandon Scott for Mayor (did you see the Sun's endorsement?) and Bill Henry for Comptroller (the Sun endorsed him, too!). Now, I want to talk about our third endorsement for city-wide office: Shannon Sneed for Council President.

Shannon Sneed joined the City Council in 2016, defeating the incumbent via community organizing, relentless door-knocking, and a powerful grassroots campaign in East Baltimore's District 13. In the past four years, she's supported each piece of environmental legislation the Council considered, from the Crude Oil Terminal Prohibition to last year's investigations into sewer backups. Serving as chair of the Labor Committee, she's sponsored many bills aimed at protecting workers and working families in Baltimore; and her landmark bill "Transparency and Oversight in Claims and Litigation," while focused on barring the city from using gag orders in residents' lawsuits against the police department, also included a provision bringing transparency to all of the lawsuits the city is engaged in. This focus on transparency, accountability, and measures to improve the lives of residents all across Baltimore have made her an extremely effective legislator.

Shannon Sneed is poised to advance environmental protections, worker protections, and government transparency as Council President. She lists Protecting the Environment as one of her top priorities as City Council President, pledging to fight for relief for residents faced with sewer backups, invest in a zero waste vision, and preserve and improve our green spaces' she'll also promote walkable neighborhoods, advocate for improvements to MTA, and promote safer streets. The Council President has enormous power to structure the City Council in ways that shape what legislation will make its ways to the Mayor's desk, by deciding which committees exist, assigning committee chairs and members to them, and deciding which proposed bills go to which committees. With Sneed's record of successfully passing legislation, working collaboratively with other Council members, and fighting for progressive change, we know she will use the role to build progress on the environmental, public health, and neighborhood issues we all care about.

When you fill out your ballot - and put it in the mail by June 2 - we hope you will vote for Brandon Scott, Bill Henry, and Shannon Sneed!