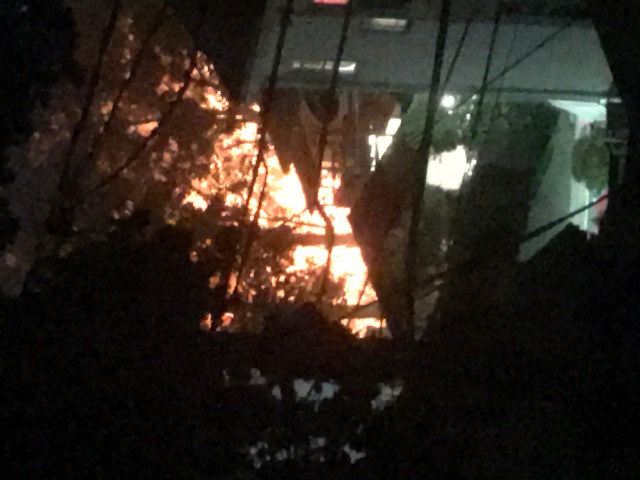 There was a fire in my neighborhood (in Dorchester, MA) this week. I woke up at about 4:40 to popping sounds – wondered if they were fireworks (annoying at that hour but ok) or maybe gun shots (yikes). It didn’t sound quite like either. But quickly I heard sirens…lots of sirens...converging very nearby.

I got up and looked out the window. First I saw sparks drifting into my yard at treetop level. And then I pulled the curtain all the way back and saw it: a massive inferno through the trees and houses. “Oh no!!” I involuntarily repeated aloud several times.

After initial thoughts of “I hope the people in that house got out,” (it was not one house but 3 and they all did get out, I learned later) and “is this close enough that I need to wake up my housemates so that we can get out quickly if we need to?” (it wasn’t), my mind started to make a lot of connections. In moments like this, where we are given an up close reminder of how tenuous life and comfort can be--but not so close that we are truly in danger, there is space for reflection. I might have reflected on my life and what I want to make sure to accomplish and enjoy, but instead my mind went to all the things I know about that are connected to fire.

My mind went to all the people and wildlife of California, Oregon, and beyond who are seeing flames, breathing smoke, and fleeing as entire forests and neighborhoods burn. “Do I get to even feel sad and scared about this one house, given all that?” I found myself wondering. Yes, definitely. A house fire is a tragedy. There are now 19 people and families (the houses are triple deckers) who have just lost their homes and more. And those houses are on a poorer block in a working class neighborhood that is majority people of color, so it’s likely that those families do not have a lot of slack in their lives or a financial cushion.

But it’s also good to think about the West coast. I got a tiny little taste of what it’s like for folks there. Seeing the flames. Breathing the smoke. After just 15 minutes breathing the smoke, I could feel it in my throat. An hour later, after taking a walk to survey the scene, I could feel it in my lungs as I walked back up the hill to my house. And this was just one short fire.

From my work at Clean Water Action, I know that the smoke is not just unpleasant to breathe, it’s toxic. It’s filled with all of the toxic chemicals in our homes and their breakdown products: vinyl, PFAS, all the chemicals in plastics, heavy metals, the list goes on. And of course toxic flame retardants, which do little if anything to stop a fire, they just make the smoke thicker and more toxic. Many of our products and building materials emit toxic fumes or dust all day every day, but when there’s a fire – everything becomes airborne. And the residents, neighbors and firefighters breathe it in.

Speaking of firefighters, the Boston Fire Department and the members of Boston Fire Local 718 did impressive work this morning. In the time it took me to run around and close my windows, they had the fire down from a massive blaze to a ball of smoke. Later on, I walked around the neighborhood and counted 12 fire trucks, countless support vehicles and dozens of people making that possible. Thank you to the men and women of the BFD. That work is not without cost. Those firefighters put their lives in imminent danger from the fire, but also in danger of cancer and other deadly illness. That toxic smoke that I closed my windows to, they breathed, and are still breathing nearly 3 hours later as I write this and they are cleaning up the aftermath. And they do that over, and over again. As a result, Boston firefighters have cancer rates that are nearly 3 times higher than the general population.

So as I started my day a little sleep deprived, and a little heartbroken, I also felt connected to all those working to right the wrongs of poverty, of toxic chemicals and of climate change. There’s a lot we can’t control, but there’s so much more that we can. We can pass laws and take action to stop climate change, eliminate toxic chemicals, and eliminate the wealth gap. We can elect candidates to office who will advance those efforts not stymie them. While I’m feeling my neighbors’ pain, I’m also feeling motivated to make a difference today. Let’s do it.

We can start by asking government to ban toxic flame retardants in household products and toxic PFAS chemicals in food packaging. Massachusetts residents can click here to contact Governor Baker and their legislators today.