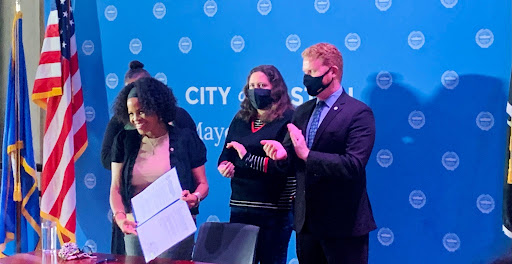 Good news! Last week, the Boston City Council unanimously voted for the Building Emissions Reduction and Disclosure Ordinance to become law. This win represents a huge step to address Boston’s largest source of emissions, building on the previous Building Energy Reporting and Disclosure Ordinance (BERDO), which passed in 2013. BERDO 2.0. requires the largest buildings to meet increasingly aggressive emissions targets over time--with no carbon offset options-- to put themselves on the path to zero carbon performance by 2050.

This victory wouldn't have been possible without the support of our members and allies. Last month, we joined the Green Justice Coalition in delivering 1,800+ petition signatures to Boston City councillors and the Mayor’s office demanding them to pass a reinforced and updated BERDO.

Undeniably, BERDO 2.0. is a bold step for the City to reduce its carbon footprint. However, what makes it a massive win for local climate activists and Bostonians is its focus on engaging communities and centering the priorities and concerns of frontline residents.

Following the release of the Carbon Free Boston 2019 report, there were significant recommendations from the City’s stakeholder engagement process for Boston to adopt a building performance standard and more rigorously address decarbonization in its largest buildings. These recommendations were written into the City’s 2019 Climate Action Plan update.

In 2020, the City set up two parallel advisory groups for its engagement process: the resident advisory group and the technical advisory group. The first group, convening local community-based organizations and residents of buildings likely to be impacted, developed policy principles and strategies to maximize opportunities and improve health outcomes. This group was facilitated by One Square World and involved community organizations including Alternatives for Community & Environment (ACE), the Chinese Progressive Association (CPA), City Life/Vida Urbana, and New England United for Justice. The second group set ambitious carbon targets, decarbonization pathways, and cost analyses. In addition to both advisory groups, the City also hosted a series of community open houses and focus groups on advising and informing policy development.

This summer, Green Justice Coalition members, including Clean Water Action, met with Boston City Councilors to emphasize the importance of having an equitable ordinance with a review board with ⅔ community stakeholders. In addition, they brought to light the current asthma crisis BIPOC communities struggle within Massachusetts and demanded that offsets were not an option.

The City and stakeholders took the necessary steps throughout the policy development process to streamline communication work with frontline communities to ensure they were informed and could participate at ease. For example, fellow organizers from ACE, CPA, Community Labor United, Boston Climate Action Network (BCAN), and New England United for Justice communicated via grassroots organizations rather than the usual city channels. The City also communicated with frontline residents by mapping multifamily buildings impacted by the ordinance, identifying affected districts, and contacting active community partners. Additionally, the outreach materials were multilingual, with workshops held in up to five languages and accessible, with local artists bringing complex policies to life. Attendees in these workshops were compensated for their time, expertise, and lived experience.

BERDO 2.0. is also designed to have communities actively contribute to the implementation via the review board. With two-thirds community representation, the review board will oversee the implementation of the emissions standards, along with the Equitable Emissions Investment Fund. As a result, BERDO 2.0 will ensure that the residents most impacted by climate change have a say in their communities and opportunities for making change.

With a community-centered ordinance, BCAN, in coalition with Community Labor United, Clean Water Action, the Sierra Club, ACE, and CPA, gathered almost 2,000 signatures in favor of expediting the ordinance and hosted a signature drop off event at City Hall two days before the unanimous voting from the Boston City Council.

Equity and energy efficiency are some of our top priorities this year at Clean Water Action. Being involved in and witnessing the making of an example of thoughtful and equitable energy policy and planning is genuinely inspiring. Let this win remind us that we should continue to center equity and justice in our goals towards sustainability. 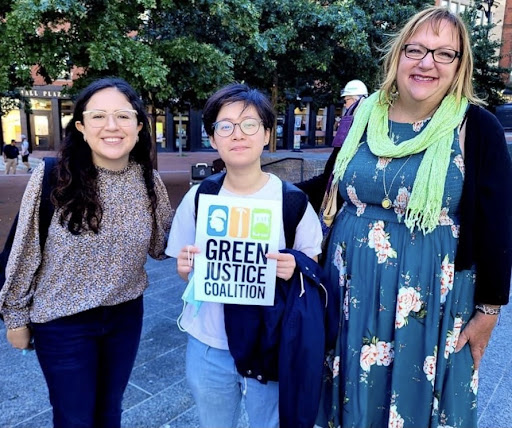