Nestle’s Got A New Owner, But They’re Playing the Same Game

In 2016, Michigan issued a permit for Nestle Waters US to increase pumping at its White Spring well near Evart

to 400 gallons per minute over the objections of scientists, legal experts in Michigan’s public trust doctrine, and more than 80,000 Michigan residents. Water advocates continue to fight this unacceptable taking of public water for private gain.

Earlier this year, Nestle finalized the sale of its water privatization and commodification division to One Rock Capital, a private investment firm with ties to major foreign corporations. There is a frightening new trend occurring across the country — the commodification of our water resources. Since the nation’s founding, water has been considered a public resource but today, in certain places, water futures can be traded on open markets like any other commodity, and not the source of all life on earth.

It is a problem that must be solved quickly — as the climate crisis intensifies, water resources will increasingly be put at risk. Climate change is water change, and treating water as a commodity instead of a human right and public good could easily lead to situations in which water is only available to those who can afford it. This can’t be allowed to happen. It is time to call on our legislative leaders to protect groundwater as a public resource in statute.

Join us this September for the 2021 Great Lakes Awards Celebration. This year’s event will feature big name leaders and activists leading the fight for water and climate justice in Michigan. This annual fundraiser supports our programs to protect the Great Lakes and public health, take action on climate and safeguard drinking water. For more information, to sponsor the event or to reserve your spot, please visit cleanwater.org/GLAC2021.

For decades, Michigan’s infrastructure has been neglected. While pothole-covered roads and crumbling bridges are the most visible problems, there is a bigger issue beneath those roads. The miles and miles of water pipes crossing communities are in urgent need of repair. According to infrastructure experts, Michigan needs to invest more than $1 billion annually for the next 20 years to adequately address outdated water infrastructure. This sort of long-term investment will require new and more equitable funding sources, and it will also create tens of thousands of good-paying union jobs.

Earlier this year, Governor Whitmer proposed a $500 million investment into the state’s water infrastructure as a down-payment on  long-term needs. This kind of investment is critical. There are still more than 400,000 lead service lines in the ground across Michigan, delivering water to our communities even though the public health dangers associated with lead exposure are well known. The state has sewer and stormwater infrastructure that threatens the health of rivers, streams and Great Lakes. And there are people across our state who need jobs coming out of the pandemic. Rebuilding Michigan’s outdated water infrastructure will create good-paying jobs that can’t be outsourced.

Take action today at www.cleanwateraction.org/mi and urge the Michigan Legislature to appropriate the funding necessary to protect our drinking water, Great Lakes, communities and economy.

TAKE ACTION TODAY: Let your State Rep know you care about our water!

Governor Whitmer has proposed a budget that makes important investments to rebuild Michigan’s crumbling water infrastructure, protect children from lead poisoning, and invest in clean energy and energy efficiency. Take action today and demand a state budget that prioritizes public health and a livable climate. Tell your State House Representative and State Senator to support critical investments in our water and future.

This is the Spring of the Water Protectors 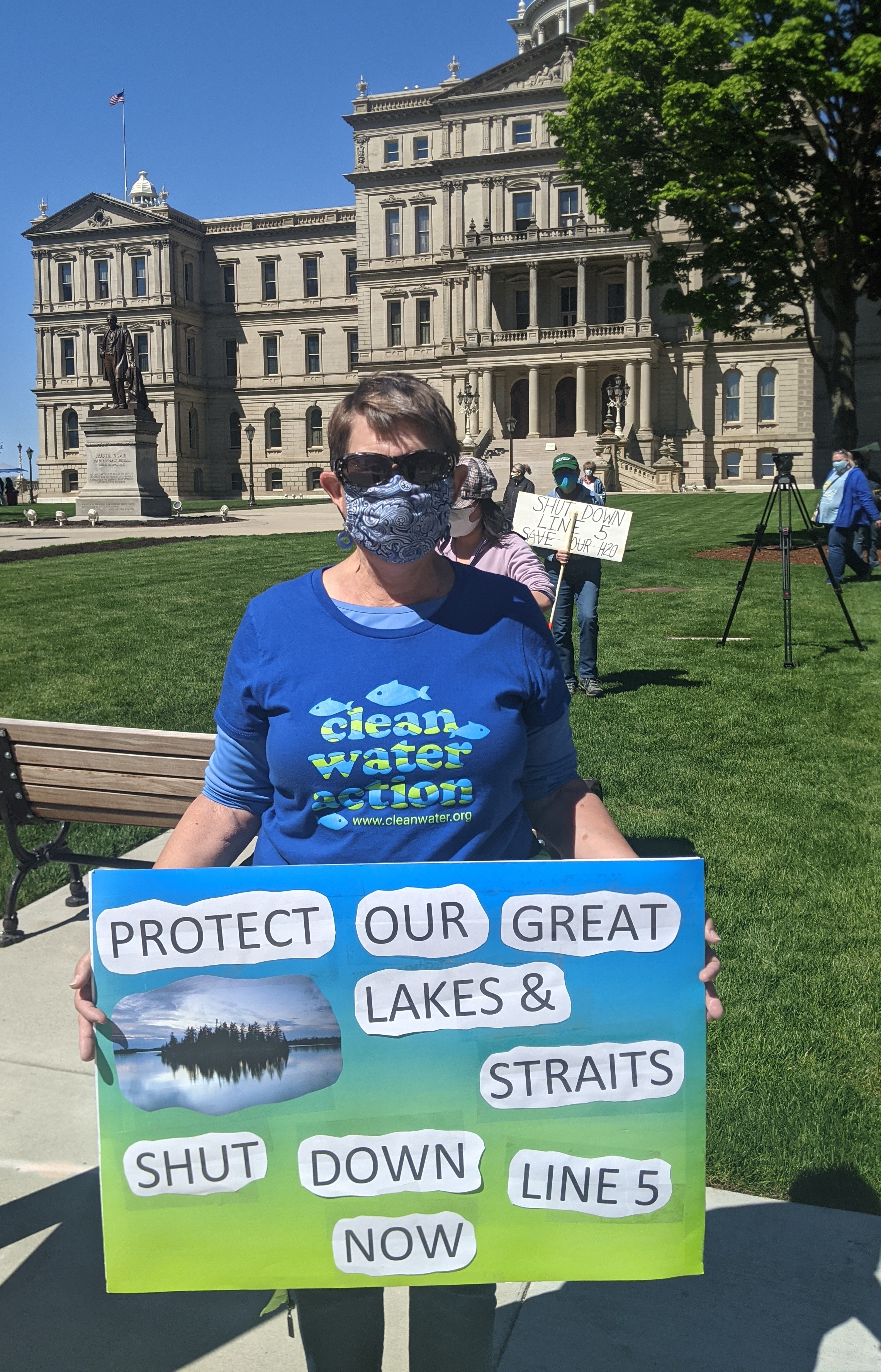 On May 13 Clean Water Action staff and members joined hundreds of other activists who gathered in Michigan to celebrate Governor Whitmer’s actions to protect our water and to symbolically evict Enbridge from the Straits of Mackinac. Nearly 100 water protectors gathered in Detroit, another 100 in Lansing, and more than 500 from as far away as California, Washington, Oklahoma, and Minnesota gathered in Mackinaw City. These events sent a clear message — that the people of Michigan, led by the Indigenous leaders who have protected the Great Lakes since time immemorial, are here to stay, and the age of the oil industry getting their way regardless of the consequences is over.

There is still a long way to go to shut down Line 5, but this was a watershed moment. It was also similar to other moments happening right now across the country. Across the midwest, Indigenous communities and activists are gathering to take the first steps on a better path forward for our country and our planet. This movement is building the power and political will necessary to confront the powerful oil and gas industry and win. The seeds that were planted in the cold, rough ground of Standing Rock have taken root and are spreading across the world. The long winter of fossil fuel domination is coming to an end, and now we celebrate the spring of the water protectors.

What Ever Happened to PFAS? Nothing — Because it Never Goes Away.

PFAS is a family of man-made toxic chemicals commonly found in firefighting foam as well as everyday consumer products like food packaging, pizza boxes, nonstick cookware, clothing and cosmetics. PFAS are sometimes referred to as “forever chemicals” because they don’t ever break down. EPA scientists have found PFAS in nearly 98% of all blood samples. These toxic chemicals cause a variety of health problems including cancers, thyroid disorders, and other neurological complications. It lives in our environment, contaminates our water, and flows through our veins.

Michigan currently has over 11,000 known PFAS contamination sites. Fortunately, the state has begun to take this issue seriously. In 2020, Michigan adopted the strongest PFAS drinking water standards in the country.

There is still a lot of work to be done. In addition to remediating already contaminated sites and enforcing the stronger drinking water standards, we must also stop the continued use of PFAS and require consumer notification of its use in everyday household products. In early March of 2021, Senator Bayer (D), along with numerous other Clean Water Action environmental champions, introduced a bill which would require warning labels on consumer products and packaging that contain PFAS. As of press time, Senate Bill 217 is in the Michigan Senate’s Committee on Environmental Quality with no hearing scheduled. And this isn’t the only PFAS-related bill that the committee’s chair, Senator Rick Outman (R), refuses to hold meetings for. View the full list of environmental bills that he is blocking here — and then give him a call and tell him that Michigan’s PFAS problem hasn’t gone away.

In February 2021, Minority Floor Leader Yousef Rabhi along with 49 co-sponsors introducedHB 4314 to hold polluters accountable for the pollution they create and the harm that it causes. A similar bill, SB 58, has already been introduced in the Senate by Senator Jeff Irwin. With over 24,000 contaminated sites across Michigan, this issue could not be more urgent. Those who are responsible for environmental contamination need to be held responsible for cleaning it up. These bills would go a long way towards ensuring that contaminated sites are addressed quickly and thoroughly, and that corporate polluters — not Michigan taxpayers — are paying for the clean up. Please join us in asking your Michigan State Senators and Representatives to support this legislation. It’s time to hold polluters accountable!