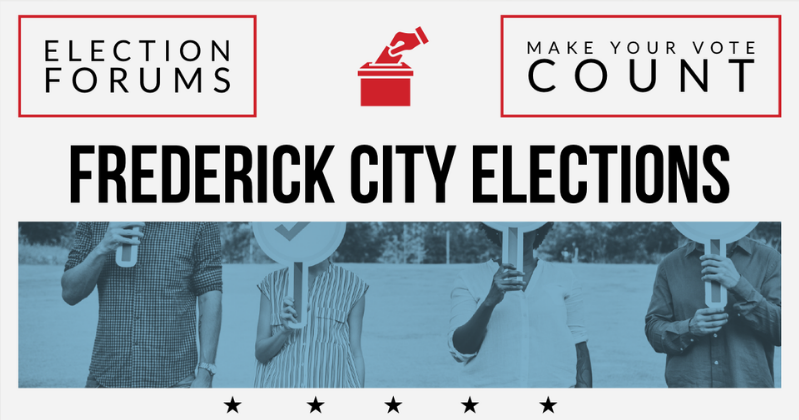 All across Maryland, the news is buzzing about the race for Governor, but in some local governments, it's already election season. If you're registered to vote with a political party in Frederick City, a ballot is on its way (if it hasn't arrived already!) for you to vote in the Primary for the Mayor and the Board of Aldermen.

Election day is September 14, but you don't need to wait until then to cast your vote. If you received a mail-in ballot, you can return it to the city by mail, or drop it off directly in a dropbox - here are the 7 drop box locations around the city. Prefer to vote in person? Join in Early Voting September 8-11, or vote on Election Day on September 14, 7AM-8PM at Trinity School Voting Center right next to Harry Grove Stadium.

Not sure who to vote for? We're here to help! Through our membership in the Smarter Growth Alliance, we've partnered with the League of Women Voters of Frederick County to host two forums where you can hear from the candidates directly. These forums will be livestreamed on the League of Women Voters' Facebook page, and you can RSVP at the links below to get a reminder before they start:

Between now and election day, we'll keep you up to date on the elections - and stay tuned for our endorsements, coming soon!

The most important thing to remember is that your vote matters, especially in local elections. Four years ago, only 4,356 ballots were cast in the Frederick City primary - less than 14% of registered voters. So your ballot, your friend's and family's ballots, and your neighbors' ballots count for a lot. Don't miss this chance to shape the future of Frederick City!