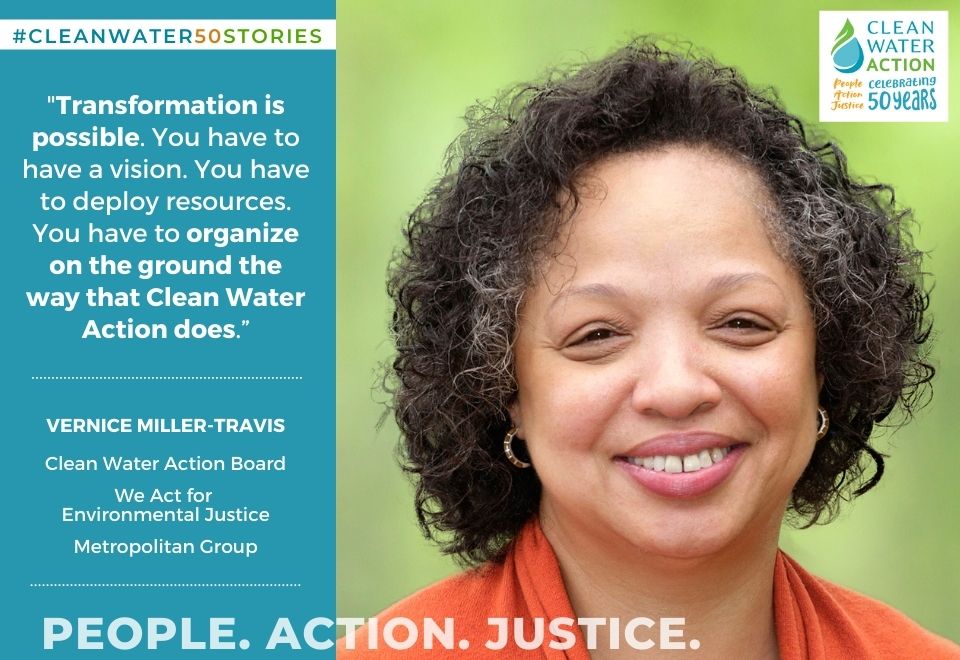 In honor of Clean Water Action's 50th birthday, we’re sharing our history and stories of the people who have helped us protect clean water along the way through #CleanWater50Stories.

When did you get involved at Clean Water Action?

I first got involved with Clean Water Action in 2004. That year is when I joined the Maryland Commission on Environmental Justice and Sustainable Communities, which is sort of the EJ Commission in the state of Maryland. And on that commission was a man named Andy Fellows. And Andy Fellows was the long-serving Chesapeake regional director for Clean Water Action. And Andy, because he was an organizer, is an organizer to the bone, and is just an amazing strategist, helped to expose me and inform me of the panoply of environmental justice issues that existed not only across the state of Maryland, but across the Chesapeake Bay region, issues that I was not particularly familiar with until I met Andy. And so he took me to lots of places. He took me to lots to meetings. But he also took me a lot to meet the Clean Water Canvas in Baltimore City.

I saw these young folk do some amazing organizing with communities that, for the most part, had been completely neglected and completely ignored in terms of water quality issues, storm water issues, sewage issues. There was a battle over an incinerator. And it wasn't just water issues that Clean Water Action was engaged in. We were engaged in a whole range of issues, but I didn't see anybody else standing with these communities like I saw the Clean Water Action Baltimore chapter do.

When I moved here, my late husband and I were great fans of Costco and the only Costco in the area at the time was in Pentagon City in Northern Virginia.

But to get to the Costco, you have to drive on this street called Jefferson Davis Highway. And I'm like, "Are you freaking kidding me? Really?" A stone's throw from the United States capital, right? On the other side of the Potomac River is a street called Jefferson Davis Highway. And it would go from Northern Virginia to freaking Richmond. It's a major highway and thoroughfare. But I'm like, "Jefferson Davis? Really? Is that what we're calling the street now?" When you're from New York, all of this vivid demonstration of the Confederacy, it's just not something you ever have to think about in New York. We are not trying to lift up the Confederacy or anything related to the civil war in New York City, except President Grant is buried in West Harlem. Thank you very much.

Anyway, I found everything about Northern Virginia, not everything, but a lot of things about it were repugnant to me because Virginia just embraced that Confederate ideology so thoroughly. Now, my husband's family is from Southern Virginia. And we'd go to Costco and we'd turn around and come back and I'd have blinders on. Don't let me have to look at the name of that street. I just couldn't take it. So, Andy's spending all this time in Northern Virginia organizing. The Canvass is there all the time organizing. And I asked Andy: "What are you doing? And why are you wasting resources and staff time in a place that just so openly reveres its racist history?" And Andy said, "There's opportunity here." For years, we were having this running conversation. I was saying, "Andy, you are wasting your time."

And what do you know? In the 2008 presidential election, Barack Obama won the state of Virginia. And until this most recent gubernatorial election in November of 2021, everybody counted Virginia as a blue state. I had no idea that that was possible. Andy saw that, right? And Clean Water Action put tremendous resources into mobilizing voters in Northern Virginia. Now, we weren't the only organization organizing in Northern Virginia, but a whole lot of people were, but we had been there for years. And we were there because Andy said, "This is a place that we can really make a difference." And so that meant so much to me, Jenny, so much to me that we would fight like that. And we would bring our human capital to help the folks in Virginia who were trying to lift up a progressive voice and a different vision for the state. I would just also say, as an aside, last year they finally got permission from the general assembly in Richmond, the capital of Virginia, to change the name of that street, right? So, it's no longer Jefferson Davis Highway.

Transformation is possible. You have to have a vision. You have to deploy resources. You have to organize on the ground the way that Clean Water Action does. We are one of the few organizations that I know of that, after the pandemic and before the pandemic, that knock on people's doors. We make relationship with communities. We engage in the issues that are important to them. We connect their reality to the broader struggle for clean water. I can't think of anything that is more valuable than an organization who works from that set of values.

And so we had a slip-up last November and a Republican got elected and he might set us back policy-wise, but we know that there is a strong, progressive, pro-environment community, not just in Northern Virginia, really all over Virginia. But we can win it back, but you have to be willing to make the investment. And we were willing to make the investment when, frankly, nobody else was, and I was a doubtful. If Andy had listened to me, we wouldn't have been in there investing those resources and turning Virginia blue. That is my favorite Clean Water Action story is Andy saying, "We are going to work in Virginia until we turn that place blue."

We were honoring our founder David Zwick at our annual fundraising event in DC. And I go to the event and I see all these people that I know from other spheres of my life. Had no idea. These people had been canvassers for Clean Water Action. No idea whatsoever. 30 years ago, 40 years ago, 50 years ago, organizing for clean water, right? And that was how so many people got their start. And my head was on a swivel. "You used to work for Clean Water Action?" It was really moving. It was really something.

Sometimes I'm still astounded by the people that I know from completely different arenas who were canvassers for Clean Water Action early in their lives. And some of them, like our our current CEO, Bob Wendelgass - Bob has been affiliated with Clean Water Action for 30+ years. That level of commitment is also something that I have profound respect for. That's certainly the way it has been for me and We Act for Environmental Justice, but you just don't find a lot of folks like that anymore, you know? I recognize it and I am so proud to be affiliated with a crew of people who are so committed to the work to defend the Clean Water Act.

What can people do to make a difference?

Pay attention to what's happening in government and show up. Pay attention to this infrastructure conversation that's rolling out and public policy. Don't let other people make decisions for you that are going to affect the lives of you, your children, your grandchildren, your great-grandchildren. Show up. Be a part of the decision making. Go to the meetings. Go to the planning sessions. Sometimes it'll be on the weekends. Please show up and let your voice be heard and tell folks, right? Remember, the infrastructure money going to states is your money. They didn't pull this money out of some magical bank account in Switzerland. This is your money. And so you should be a part of the conversation determining how does that money get spent and how does it get spent to address some longstanding infrastructure inequities in terms of water, sanitary sewage, flood mitigation, storm water. This is our moment, right? And we got to grab this moment.