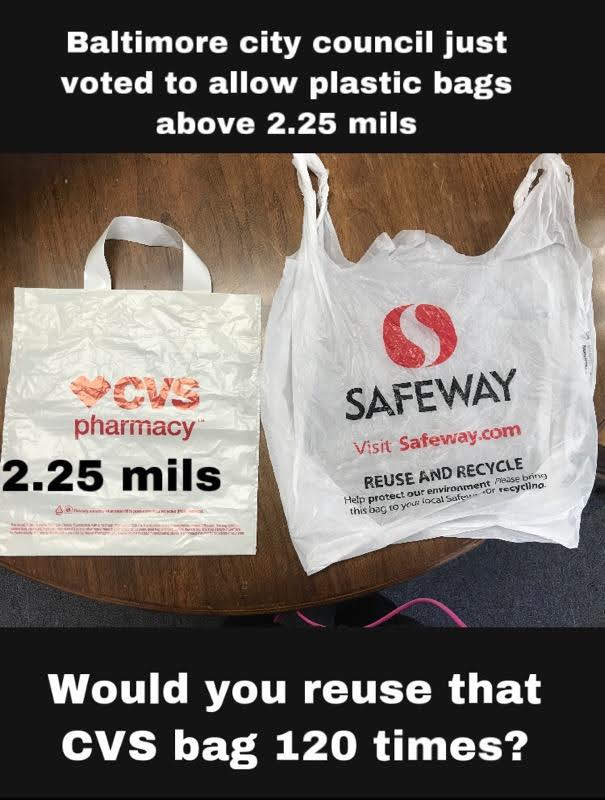 On Monday October 7 at 1:00 pm, I attended the Baltimore City Council Judiciary Committee's work session on the Plastic Bag Reduction Bill (#19-0401). It had to do with redefinition of a banned "plastic checkout bag" from a maximum thickness of 4 mils (thousandths of an inch) to a mazimum thickness of 2.25 mils. This would mean that distribution of plastic bags below 2.25 mils would be disallowed, and distribution of those between 2.25 and 4 mils to customers would be standard. In essence, a slightly thicker bag would be standard to encourage a false spirit of reusability. According to Cailey Locklair of the Maryland Retailers Association, who was present at the work session, "These bags will be able to be used 120 or more times" and "4 mils is an arbitrary industry standard." Though this would introduce a thicker bag, one must question if it would be truly effective in removing any plastic bags from the street. It seems as if there will be the same quantity of plastic bags with higher thickness which would perpetuate the same problems that currently stand with thinner plastic bags.

Though the motion was passed 4-2, some members of city council, like us, were skeptical. Councilmembers such as Mary Pat Clarke, Shannon Sneed, and Bill Henry said they had never seen the proposed redefinition before the work session. Council members Mary Pat Clarke and Bill Henry (who though not on the committee, was present) were specifically vocal in their disapproval of the redefinition saying that "a plastic bag is a plastic bag" and that the redefinition of a checkout bag seemed rushed. Judiciary Committee Chairman Costello was supportive of the change, saying repeatedly that "other localities have made the checkout bag definition into a 2.25 mil standard" and "The council president and mayor are in support of the redefinition."

It's not necessarily true to call a 4 mil standard "arbitrary" or a 2.25 mil "industry standard;" in fact, several cities use a 4 mil standard to define a threshold for a plastic checkout bag. Austin and Dallas both use a 4 mil standard as a minimum for a reusable plastic bag. Connecticut defines a plastic bag in  Public Act No. 19-117 as “a plastic bag with a thickness of less than four mils that is provided by a store to a customer at the point of sale." Several localities in Massachusetts such as Andover, Aquinnah, Arlington, and Belmont also use the 4 mil standard. In cases such as in California there have also been evidences to show the 2.25 mil standard as lackluster. The organization 1bagatatime cites a survey done by the Save our Shores organization in Monterey, showing that out of 740 consumers surveyed, only 4 said they reuse a bag of that thickness. This seems to be less a question of public consciousness, and more an ineffective minimum "reusability" standard.

This clearly was confusion, as later in the week in his press availability (watch it here), Mayor Jack Young said "the Chair of the committee might’ve misspoken what I said," and when asked about his standpoint on the issue he said "I support a ban because it ends up in our trees and in our harbor. I support a ban. All plastic bags.” Stefanie Mavronis, a spokeswoman for the city council president Brandon Scott, said that Scott’s position was in line with Mayor Young’s. "From the beginning, he’s been very supportive of the spirit of this legislation and does support a full ban on plastic." (Read more in the Sun here.) Councilman Costello has now also indicated increased openness to change on his position of the 2.25 mil redefinition.

Though after the confusing events of Monday, the issue of plastic bags and whether they will continue to be allowed or done away with in the city seems to be going in the correct direction, vigilance is still required. Continued  accountability of council members and the mayor is also paramount in hopes for a full plastic bag ban. Click here to email the City Council and Mayor in support of an actual ban on plastic bags!