Clean Water Action is leading the resistance against U.S. Environmental Protection Agency Administrator Scott Pruitt’s reckless rollback of safeguards to protect rivers, lakes, and bays from toxic power plant water pollution. In 2015, after years of litigation and advocacy, environmental organizations finally won strong protections that required power plants, for the first time ever, to control the amount of toxic metals, nutrients, and other harmful chemicals they can dump in our water resources.

In response to pressure from the power plant industry, this past spring Administrator Pruitt issued an administrative stay to immediately halt the compliance deadlines for these new power plant water pollution limits so that EPA can instead consider weakening them. Industry claims the 2015 limits are too expensive, even though only 28 percent of all coal-burning plants will incur any cost to upgrade to better technologies that can eliminate or drastically reduce this pollution. Power plants are the leading source of toxic water pollution in the country and reducing the amount of arsenic, lead, mercury, selenium, and other contaminants has tremendous public health and environmental benefits. Clean Water Action and other environmental organizations sued EPA over this action because Scott Pruitt recklessly ignored the negative impacts that delaying these critical protections will have on our water resources and the people and wildlife that rely on them. In addition to issuing an administrative stay, EPA also proposed to delay these protections under the Clean Water Act. Clean Water Action and our allies mobilized thousands of people to submit written comments to EPA in opposition to this delay during the short 30-day public comment period. EPA denied our request to extend the comment period another 60 days, which was standard practice for proposed regulations prior to Pruitt’s reign at the agency, though EPA did hold a hearing at our request to solicit additional public input on its proposal. Over 40 people, including Clean Water Action staff, staff from dozens of public interest organizations, and individuals directly impacted by this pollution asked EPA to immediately withdraw its proposal to delay these protections; only three people testified in support of the delay, and they all represented power plant utility interests.

Despite overwhelming public opposition to indefinitely delaying these critical protections that, once in place, will eliminate over a billion pounds of toxic water pollution every year, EPA is fast tracking finalizing this rule and will soon propose to significantly weaken parts of the pollution standards established by the Obama administration in 2015. EPA appears more interested in catering to industry’s request to delay and weaken these long overdue protections without giving adequate consideration to the concerns of communities most impacted by this toxic pollution. Clean Water Action will continue to fight Scott Pruitt’s audacious assault on our nation’s most precious resource.

The business plans for oil and gas companies are based on drillings, extracting, and burning all the oil and gas resources that can be acquired. In order to continue to grow and increase profits, the industry thinks it must operate with a bare minimum of public health and environmental protections. The only way to achieve that is to receive help from the inside — and they are getting it.

Late in August 2017 Clean Water Action released a new report (right) highlighting the oil and gas industry’s influence throughout the 2016 election and on the Trump Administration’s energy and environmental policy. The industry uses its vast financial resources to maintain oversized political influence. The results are startling: 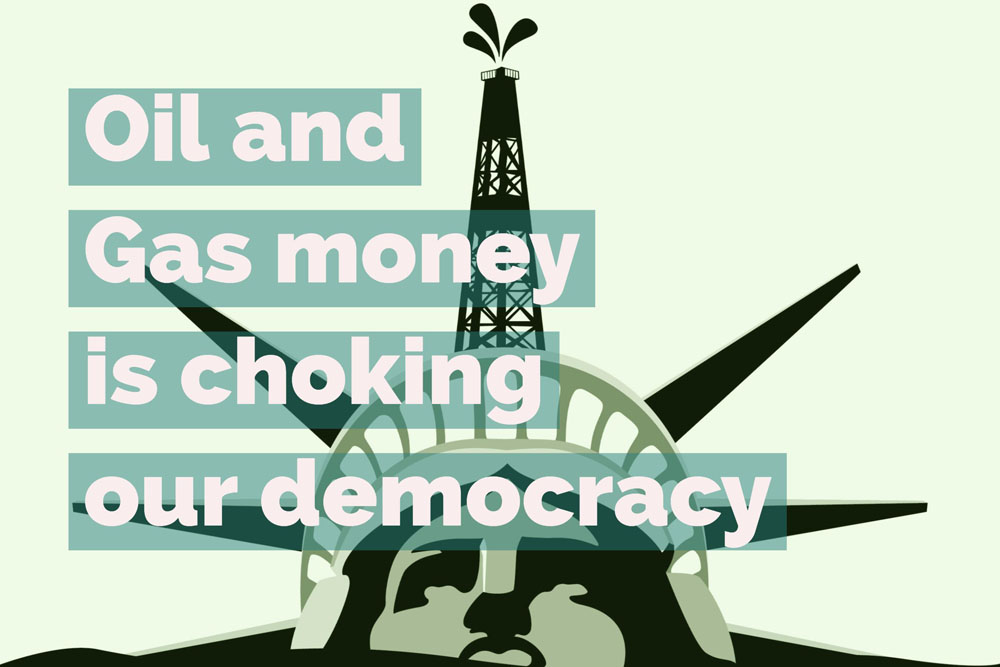 The oil and gas industry knows that they need the American people more than the people need them. The only way to continue their reign over American energy and environmental policy is to rig the political system.

Clean Water Action will continue to challenge the oil and gas industry’s polluting influence in our democracy. We urge all Americans to demand elected officials and political appointees prioritize public concerns over special interests and hold them accountable when they do not. It’s the only way to break the stranglehold.

Teaming Up with Johns Hopkins  to Expose Enhanced Oil Recovery

Despite accounting for roughly 60% of U.S. oil production, most people have never heard of enhanced oil recovery, or EOR. Clean Water Action’s new report shines some light on the common oil and gas production activities that involve the injection of fluids, gases and chemicals underground.

In August, Clean Water published The Environmental Risks and Oversight of Enhanced Oil Recovery in the United States. Researched and written by an all-star team of masters students from Johns Hopkins School of Advanced International Studies, the report provides an overview of EOR technologies, environmental impacts, and recommendations for how state and federal regulators can improve oversight.

The report, the first ever collaboration between Clean Water Action and Hopkins, found that EOR can contaminate drinking water sources through underground migration of chemicals, well failures, blowouts and spills. Some forms of EOR have significant climate impacts as they involve energy intensive steam injection.

Yet federal and state agencies tasked with monitoring the oil industry do not have the data, resources and regulations needed to adequately protect water from risks associated with EOR. Both state and federal rules are inadequate and have gaping holes that include a lack of required groundwater monitoring or injection chemical reporting. EPA has not even studied the threats of EOR since the 1980’s despite increased injection activity across the country. With more than 145,000 EOR wells in the U.S., regulators need to step it up.

California and Texas, the states with the largest number of EOR wells, have been the focus of Clean Water Action efforts to improve the Underground Injection Control (UIC) program, the regulatory scheme that oversees injection wells, including those used for EOR. The report found major shortcomings in how both of these and other states regulate EOR. In many cases regulators identified staffing and financial resource shortfalls as the cause of inadequate oversight. Inexplicably, yet not surprisingly, the Trump Administration has proposed slashing the budget of UIC grants to states by 30%.

Matt Geraci, one of the report authors said of his experience digging into EOR, “To say that enhanced oil recovery is an understudied topic would be a huge understatement. Since basic information is often not publicly available or is outdated, our research could only scratch the surface of EOR’s haze. We hope that this report can bring these issues to the forefront so changes can be made to protect our drinking water and climate from EOR.”

No Summer Recess for Attacks  on Our Water and Health

While floundering on some parts of their agenda, notably a failed effort to repeal the Affordable Care Act and judicial challenges to their immigration ban, the Trump Administration has been mostly successful on its plan to radically deregulate polluting industries and remove protections for our air, water, health, and climate. In his first months in office President Trump signed repeals of key Obama-era protections, including the Stream Protection Rule; the Oil, Gas, and Mining Anti-Corruption Rule; and Protections for Alaska’s Wildlife. He also issued executive orders to fast-track construction of the Dakota Access Pipeline and the Keystone XL pipeline, and to begin to withdraw the United States from the Paris Climate Accord. Donald Trump’s cabinet members, most notably EPA Administrator Scott Pruitt, have reversed or delayed environmental safeguards on everything from climate and clean energy research to chemical safety to methane pollution to lead bullets on federal land.

So it’s no surprise that the assault on our health and environment continued throughout the summer. Below are just some of the actions taken by Donald Trump’s executive branch in July and August:

Getting a Leg Up on Getting the Lead Out

Clean Water is working with the Lead Service Line Replacement Collaborative to provide tools for communities that are interested in full lead service line replacement. Getting lead out of water requires increased attention from government at all levels, water systems, and consumers:

We need to get lead out of contact with water. That’s where full lead service line replacement comes in. The Lead Service Line Replacement Collaborative came together to assist communities that are considering a replacement programs. A collaborative community-wide approach has multiple benefits:

For more information about the Lead Service Line Replacement Collaborative visit this page.