The Garden State is already feeling the effects of climate change and lead contamination threatens residents in Newark and other communities. But instead of acting, the legislature has failed to pass legislation that protects water and health so far this term. Responsible budget solutions are delayed, and appointments on critical environmental commissions have gone unfilled. Too few individual legislators have been willing or able to challenge the process that allows good environmental bills to stall while bills catering to special interests pass quickly.

— Incompletes: 13 key pro-environment actions that are  stalled in the legislature

— Failing Grades: 6 significant bills that were anti-environment, by design or by process, that quickly passed both houses

— Passing Grades: 3 pro-environment bills that did pass and become law

This represents a failure of legislative leadership to prioritize public health, clean water, and environmental justice. We need our New Jersey legislators to understand protecting the environment, promoting renewable energy and energy efficiency, fighting the climate crisis, and ensuring safe drinking water are all key to ensuring a healthier life for our families and a strong green jobs economy. In fact, there were 19 legislators who stood up for the environment even when the majority of the legislature would not stand with them. Read the full scorecard here.

The scorecard highlights the key environmental bills currently stalled in the legislature. During the lame duck session, between election day and mid-January, the legislature must make sure the best Plastic Bag Ban (S2776/A4330) and Electric Vehicles bills (S222/A4819) reach the governor’s desk. Additionally, Clean Water Action supports passage of an Environmental Justice bill (S1700 /A5094) that “says no to new polluting facilities” in disproportionately impacted low income communities and communities of color. Next we seek to prioritize a package of bills that address and fund lead service line replacements.

Contact your legislators, tell them to stop stalling and take action to protect the environment and public health.

The Climate Crisis in New Jersey

The increasing urgency of the climate crisis is why Governor Murphy campaigned on a plan to move New Jersey quickly onto 100% clean energy. Yet his draft Energy Master Plan (EMP), released this summer fails, to meet the moment, and in some cases could exacerbate the problems. The number of proposed fossil fuel projects has increased from 12 to 15. Two have already started and are nearing construction (Southern Reliability Link pipeline in south Jersey and Gateway compressor station in Roseland respectively).

Since the launch of Empower New Jersey in 2018  Clean Water Action and its coalition partners have worked tirelessly to increase public participation and awareness of the key provisions and shortcomings of the state’s draft EMP. The organization mobilized hundreds of comments into the official record, thousands of petition signatures and “Moratorium Monday” calls to the governor, turned people out to eight public hearings around the state, showed up at Governor’s town hall meetings and other events to make our voices heard, as well as received extensive press coverage.

New Jersey is facing an all out attack from the fossil fuel industry attempting to lock in dependance on a fuel of the past.

Each day the state fails to strengthen and implement a real renewable clean energy plan sets us further from achieving 100% renewable energy over time with an interim greenhouse reduction goal of 45% by 2030. The governor should listen to the youth who organized a “March for Our Lungs” and rally to demonstrate their opposition to the Meadowlands Gas Plant and subsequent Climate Strike actions across the state in September.

Efforts to date have yielded incremental successes. The Governor publicly announced opposition to the Meadowlands gas plant. The NJ Department of Environmental Protection rejected the initial Penneast and NESE pipeline applications. However none of the projects are dead. Rest assured, the fossil fuel companies will be back with new permit applications while the federal government is attempting to take away state’s rights when it comes to saying no to these projects.

Clean Water Action, allies and supporters will continue to demand a strong clean energy plan and rapid implementation to avert climate catastrophe. We need an immediate moratorium on ALL new fossil fuel projects and aggressive cuts to existing sources of pollution, with a priority on reducing pollution in our most overburdened communities. Get involved — locally or at the state level. View the Empower NJ report, campaign activities and updates here. 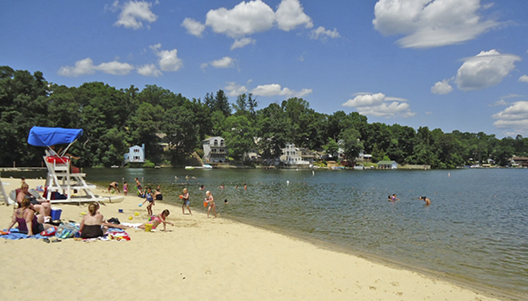 Beach at Lake Hopatcong. New Jersey closed Lake Hopatcong after the state Department of Environmental Protection detected a toxic bacteria caused in part by one of the warmest springs in the past century.

Single-use plastics and the prevalence of disposable products continue to negatively impact the environment, health and wellness of New Jersey residents and wildlife. This makes it more and more important than ever to pass legislation that bans these items locally and statewide. Clean Water Action’s ReThink Disposable campaign has been working with local governments and the State House to pass bans on single-use plastics and disposable foodware items like polystyrene foam containers. Upwards of 40 NJ towns have passed some kind of single-use disposable bag or foodware ordinance. The number exceeds 50 when including bans on intentional balloon releases, with several more considering local bans.

Some towns have hesitated in the hopes that the statewide ban prohibiting single-use plastic bags, polystyrene foam food service products, and charging for paper carryout bags, will come first. Although this bill (S2776/A4330) moved out of the Senate Environment and Energy Committee over a year ago, there was no timeline for its passage. To build momentum, Clean Water Action has focused efforts on helping towns pass local ordinances  and turn up the heat on state legislators — and it is working!

Sponsors of the plastics ban, legislative leadership, and the governor’s office have indicated that they are now committed to passing a bill by the end of the year. Clean Water Action is campaigning to make sure that the strongest version of this bill gets passed.

State and local legislative action is an essential step in helping New Jersey become more sustainable and reduce dependency on disposable products — and it’s time to take action! Talk with your local environmental commission about passing a single-use plastics ban, and inform your state representatives of your support of a comprehensive statewide ban. States and cities like California, Chicago, New York have been incredibly successful in curbing plastic bag and products usage — help New Jersey take the step and take action. Our communities and ecosystems will be better for it. 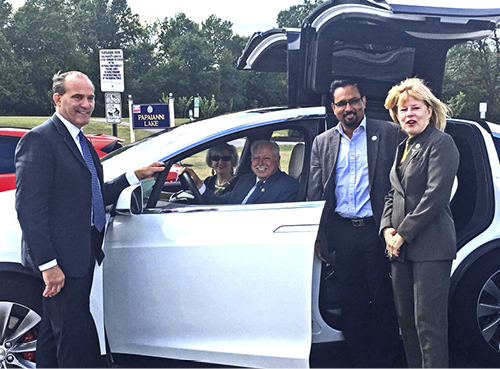 Clean Water Action recently launched a neighbor to neighbor public education campaign to “Take Back The Tap, Let The Water Run”. It is designed to educate residents, homeowners, community activists and service providers about lead in water.

No level of lead is safe. It causes neurological, behavioral, and learning disabilities, as well as organ dysfunction. The alarm has been sounded in large cities like Newark, Trenton, Camden and Paterson; but anyone living in a home built before 1976 is likely to have a lead service line (the pipe from the curb to your home).

The lead in drinking water is a health crisis that has a solution. Clean Water Action firmly believes that the replacement of lead service lines is the only permanent solution for removing the majority (80%) of the source of lead in our drinking water. Fixtures, faucets and solder make up the remaining 20%.

Clean Water Action is currently working with the Newark Water & Sewer Department as well as Trenton Water Works to inform property owners with suspected lead and galvanized steel service lines, and/or lead goosenecks of the steps needed to protect their families from lead exposure. This is in part being accomplished by Clean Water Action hiring local residents to canvass their neighborhoods. In Newark, resources have been secured to replace all 18,000 lead service lines within 36 months at no direct cost to the homeowner. Trenton’s program is just getting off the ground.

Safe and affordable drinking water is a human right. We must be able to trust that the water we drink will not harm us. Clean Water Action’s “Take Back The Tap, Let The Water Run” campaign plays a key role in ensuring that permanent solutions and protections are implemented across the state. Click here for our national letter-writing campaign about the newly-proposed federal EPA Lead and Copper Rule. 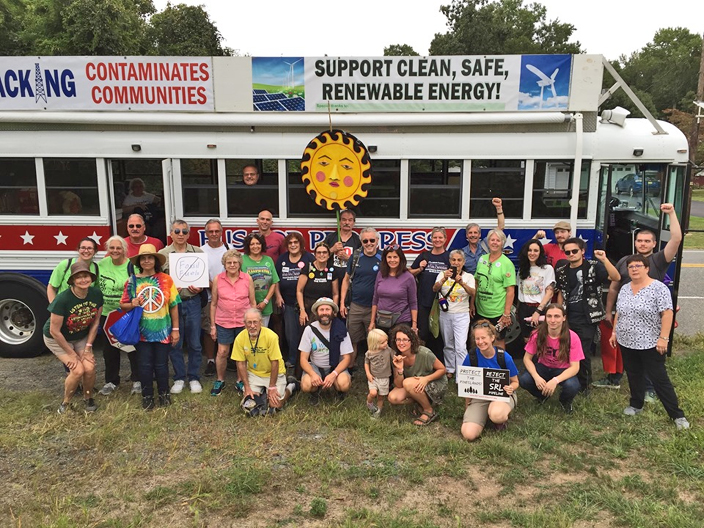 Stay up to date on our New Jersey clean energy campaigns here. 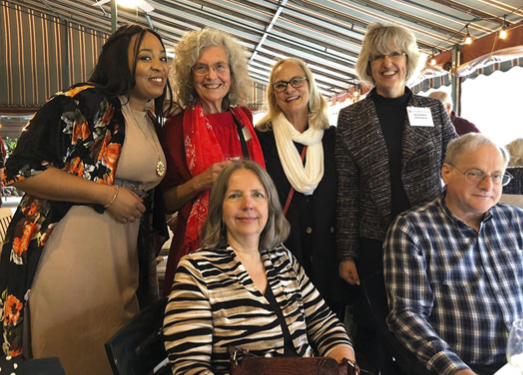 Thanks to all those who supported this year’s successful Autumn Toast! Proceeds will benefit local programs to protect drinking water, reduce plastic and foam pollution, move NJ aggressively towards 100% renewables, as well as address the needs of environmental justice and port communities who face multiple pollution impacts every day.