Clean Water Action built on 2018’s electoral green wave by endorsing a slate of candidates in the May 20th primary. In Philadelphia, the results have set the stage to advance campaigns to eliminate single-use plastic bags and reduce residents’ exposure to lead poisoning.

Clean Water Action’s biggest victory was in the 3rd City Council District where the organization helped elect Jamie Gauthier, ousting a family dynasty who held the seat since 1975 in the process. Jamie’s background in conservation and sustainability gives Philadelphians a new voice, someone who understands and will prioritize environmental and health issues. Three of the five City Council At-Large Democratic spots were won by Clean Water Action endorsed candidates, Helen Gym, Derrick Green and Katherine Gilmore Richardson.

In Pittsburgh City Council, the organization helped relect Deb Gross, Corey O’Connor and Bruce Kraus who’ll now have an opportunity to build upon their environmental legacy. Clean Water’s efforts helped oust another longtime incumbent in favor of Bobby Wilson, whose respiratory health research experience makes him a new voice that better understands the impact unaddressed pollution has on residents’ health.

In Allegheny County Council progressive newcomers endorsed by Clean Water Action, Liv Bennett and Bethany Hallam, won — outshining establishment incumbents. This continues to reshape this body with voices that will make environmental issues a greater priority for the county.

On June 1, Clean Water Action partnered with the Philadelphia Water Department to hold a Green Blocks Sustainability Fair in Philadelphia. This first-ever event brought 150 residents together with public and private sector exhibitors to provide tools for sustainable activities and projects for healthier homes and cleaner and greener communities. Exhibitors provided residents with information, demonstrations, hands-on workshops and job opportunities. The day’s festivities included community leaders telling the story of Kemble Park, the site of the event and one of the Philadelphia Water Department’s most outstanding green infrastructure projects in its Green Cities, Clean Water plan, as well as giveaways of reusable check-out bags and recycling bins.

Eighteen Pennsylvania cities tested higher than Flint, MI for elevated blood lead levels and according to the Center for Disease Control and Prevention, Pennsylvania ranked second for the greatest number of children poisoned by lead. Yet according to the Pennsylvania Department of Health, only 28% of children within the Commonwealth under the age of two are tested for lead.  Lead is a highly poisonous metal and childhood exposure can cause developmental disorders, including lowered IQs and aggressive or violent behavior.

Clean Water Action is advocating for passage of State Senator John Yudichak’s (D-Luzerne/Carbon) SB 312 and State Representative Mary Isaacson’s(D-Philadelphia) HB 79 which would require that all Pennsylvania children are tested for lead at ages one and two. This is an important strategy to address the testing gaps, identify and help children who have been exposed and help us develop and implement a comprehensive strategy for intervention and prevention.

The policy was among the recommendations provided by the Pennsylvania State Senate’s Lead Task Force which was created under SR33 and conducted a comprehensive review over the past 18 months of Pennsylvania law and public policy related to lead exposure and abatement practices. 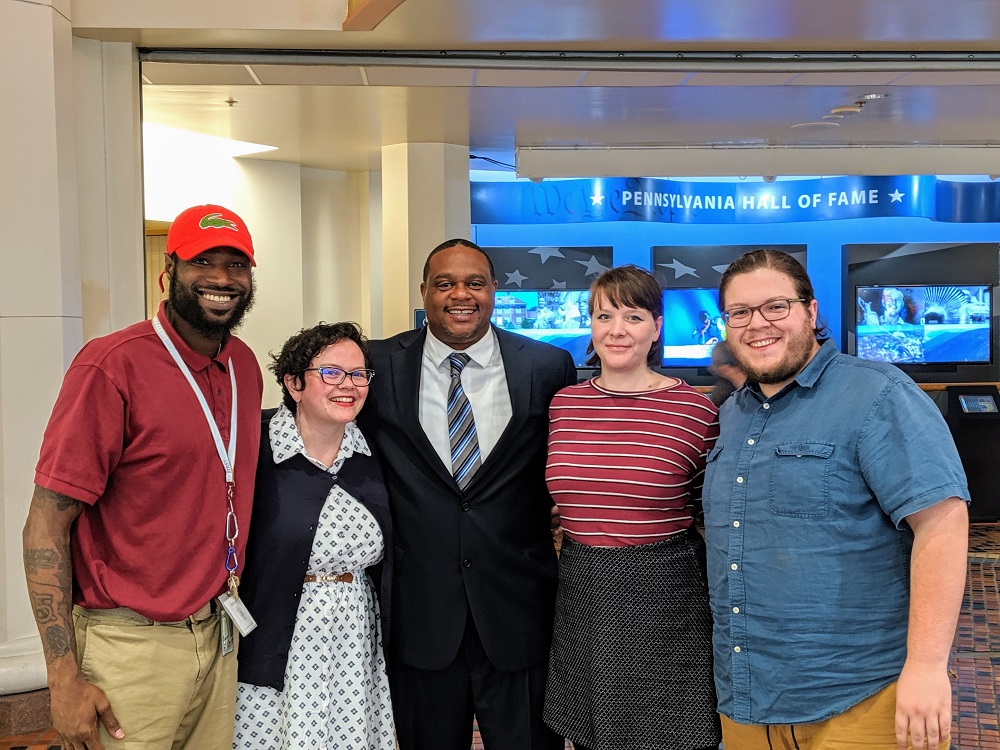 In May, Philadelphia City Council adopted its own blood lead level testing policy which was sponsored by Councilwoman Blondell Reynolds Brown. Clean Water worked closely with the councilwoman’s staff to draft the bill’s language and ensure it emulated a similar policy enacted by Allegheny County in 2017 following Pittsburgh’s water reaching federal action levels for high lead levels. Other bills dealing with lead adopted by Philadelphia City Council included updating current law on lead certification in rental properties as well as requiring lead safe certification for certain renovation projects on city-owned or occupied buildings prior to the completion of the renovation project. With Pennsylvania’s biggest counties taking action to require lead testing, Clean Water is pushing for the state General Assembly to finally take action and ensure protection for all of the state’s children.

To highlight all the recent movement around this issue we brought residents from across Pennsylvania to Harrisburg in June to lobby their legislators. The effort was the first of its kind for this critical issue and resulted in new commitments of support from legislators.

In March, Clean Water Action partnered with State Rep. Ed Gainey (D-Pittsburgh) on an educational community event in the Homewood neighborhood of Pittsburgh which drew 100 residents. Attendees learned about how to take advantage of opportunities through Pittsburgh Water and Sewer Authority to get free replacement of their public and private water lines to eliminate the lead in their pipes, environmental justice issues, the threat of water privatization, testing your children for lead poisoning, and other steps residents can take to empower themselves and their family and neighbors to deal with these issues.

On Christmas Eve, 2018 a massive fire at the Clairton Coke Works, the largest of U.S. Steel’s 3 plants in the Mon Valley south of Pittsburgh and the largest coke production operation in North America, painted the sky red and orange as first responders and steelworkers battled a blaze that stretched the size of a football field.  In the end, the fire was contained but at the cost of vital pollution control equipment for this highly toxic industrial site. With US Steel continuing to produce coke at the plant, emissions soared to over 20 times their permitted levels.

For two weeks US Steel and the Allegheny County Health Department (ACHD) failed to inform Clairton area residents of the fire or conditions at the plant. With US Steel’s efforts not resulting in a quick fix, and monitors showing air pollution levels exceeding Clean Air Act standards, ACHD issued a warning to 22 Mon Valley communities near Clairton to avoid going outdoors especially for children, seniors, and people with respiratory or heart conditions.  In the Mon Valley this comprises about half the population.

By mid-February, ACHD issued an enforcement order to US Steel requiring that pollution control be brought back on line or the plant would be required to suspend coke operations. In early April, 100 days after the fire, US Steel announced that they had finally repaired the pollution control system and brought it on-line.

For the first time in decades elected officials are taking notice and demonstrating support for addressing pollution from the Clairton Coke Works. In February, State Representative Austin Davis and State Senator Jay Costa convened a policy hearing in the Mon Valley to investigate what steps could be taken to improve air quality, community notification procedures and emergency response plans. During the hearing legislators challenged US Steel to improve their operations and have their actions emulate their words. The hearing also helped lead to a new enforcement action by ACHD.

Clean Water Action has been working with residents to band together to better advocate for themselves and their community. Their new vision for the Mon Valley includes getting US Steel to reduce pollution through shutting down the oldest parts of the plant (dated back to the 1950s), and protecting residents through providing air filters and health screenings. One of first activities we helped them coordinate was a Community Listening Session in May where government officials were invited to listen to the stories and experiences of residents who are struggling with daily life of living near US Steel.

Clean Water Action released a report in May detailing the history of violations of the federal Clean Air Act standards in the Mon Valley over the past 12 years. The results found air quality monitors in the Mon Valley recorded some of the worst air, not just in Allegheny County, but throughout Pennsylvania. Over 400 exceedances of federal standards for sulfur dioxide and fine particles, or breathable soot were recorded by monitors in the Mon Valley since the EPA established the health based standards in 2006. In just 2018, there were three times as many violations in the Mon Valley as the rest of the state combined! It’s clear US Steel’s problem with pollution existed long before the fire took place. The full report is available for download at: https://www.cleanwater.org/monvalley

There is growing concern surrounding contamination by per- and polyfluoroalkylsubstances (PFAS), a suite of over 3,000 toxic chemicals widely used in industry. The issue blew open in Pennsylvania in 2014 when the chemicals were discovered at unsafe amounts in public and private drinking water wells in Bucks and Montgomery Counties. Now closed military bases had used firefighting foam containing PFAS for decades, and the chemicals, which are highly persistent in the environment, slowly contaminated groundwater aquifers used by thousands of residents. The scope of the problem has grown since then with the Pennsylvania Department of Environmental Protection (DEP) identifying at least 20 other contamination sites across Pennsylvania.

In addition to firefighting foam, PFAS chemicals have been used in a wide variety of other consumer products including food packaging, non-stick cookware, and clothing like raincoats. Exposure is associated with cancer, thyroid disease, ulcerative colitis and birth defects. A recent study indicates that the health effects of PFAS chemicals is a concern at lower levels than previously thought and that they break down slowly in the environment, so existing contamination is not going away.

Clean Water Action is advocating for state officials to act by supporting efforts under way by Pennsylvania DEP to develop a strong state drinking water standard using the most current science available, requiring a ban on consumer products sold in Pennsylvania that contain PFAS, and ensuring responsible parties, including the Department of Defense and PFAS manufacturers, pay for the costs of cleaning up contamination not taxpayers.

Clean Water Action continues to monitor and fight anti-environmental bills moving at the state level. This includes HB 827 which seeks to undermine the fracking ban in the Delaware River Watershed, the drinking water source for 15 to 17 million people; SB 619 which weakens the Clean Streams Law by changing spill reporting requirements and fundamentally altering the definition of water pollution; and a package of re-introduced bills crafted under the guise of “regulatory reform” but that would actually dramatically weaken our safeguards and ability to hold polluters accountable.