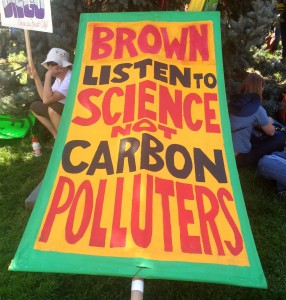 This post is part of Clean Water Action's ongoing series this month on California Oil and Gas policy. The entire “July: Oil and Gas Month” series can be found here.

Last week was a major turning point in the fight to protect California from fracking and other dangerous oil production activities. The state-sponsored scientific study dropped on Thursday. And, while it wasn't a knockout punch to Big Oil, it was a scientific body blow that cuts through the misinformation and turns back the spin.

Unlike some recent coverage on fracking related studies the stories in the major papers reflected the science. Headlines like “Water and wildlife may be at risk from fracking's toxic chemicals, panel finds” and “Most fracking waste dumped in unlined pits in CA, study finds” offered fact-based findings and highlighted a range of recommendations contained in the study.

At the core of the study are two findings that have always guided our work on California oil and gas issues.

Perhaps the most significant finding in the report is that current data, transparency and oversight is inadequate to be able to effectively safeguard communities and the environment from the oil industry. For example, despite landmark chemical transparency measures for fracking as a result of SB 4, we still don’t know all the chemicals introduced into oil wells, such as the cocktail of chemicals routinely used in well maintenance or chemicals injected as part of enhanced oil recovery (EOR) operations. The report points out that “operators have unrestricted use of many hazardous and uncharacterized chemicals” whether fracking or using other techniques. And even when we know which chemicals are used as is mandated under SB 4, information on their impacts, or how they react with each other underground is often unknown.

The report is clear in its condemnation of current oil and gas wastewater disposal practices and oversight. We’ve been investigating the use of unlined pits in California for the last year, but the fact that almost 60% of fracking wastewater is dumped into unlined pits shocked even us. While many states have banned this practice, here in California, some 900 oil and gas waste disposal pits dot the Central Valley, and we are now just learning about pits in other regions too. Over 200 of them don’t even have permits, and many overlay high quality groundwater. Comprehensive testing of oil and gas wastewater isn’t required and there is little or no monitoring for contamination near disposal sites. This current oversight (read: lack thereof) flies in the face of the report’s recommendations that advise to appropriately manage oil and gas wastewater.

It’s clear that the state has fallen behind the science when it comes to overseeing oil and gas activities. Luckily we are here to help. We’ve got a few ideas!

For starters, Governor Brown should listen to the science and implement an immediate moratorium on all well stimulation, including fracking. We’ve been saying it for years, and now the scientists agree that there are unaddressed risks. Allowing fracking to continue without safeguards in place is unacceptable.

In response to the study, and to make it 100% clear what it says, we have partnered with allies across the state on a new petition to Governor Brown. Tens of thousands of Californians have already signed it and we’re asking you to do so too. Add your voice today here: http://stopfrackinginca.org/#CleanWater

Stay tuned and we'll fill you in on our other ideas about how the state should respond to the study over the coming days.