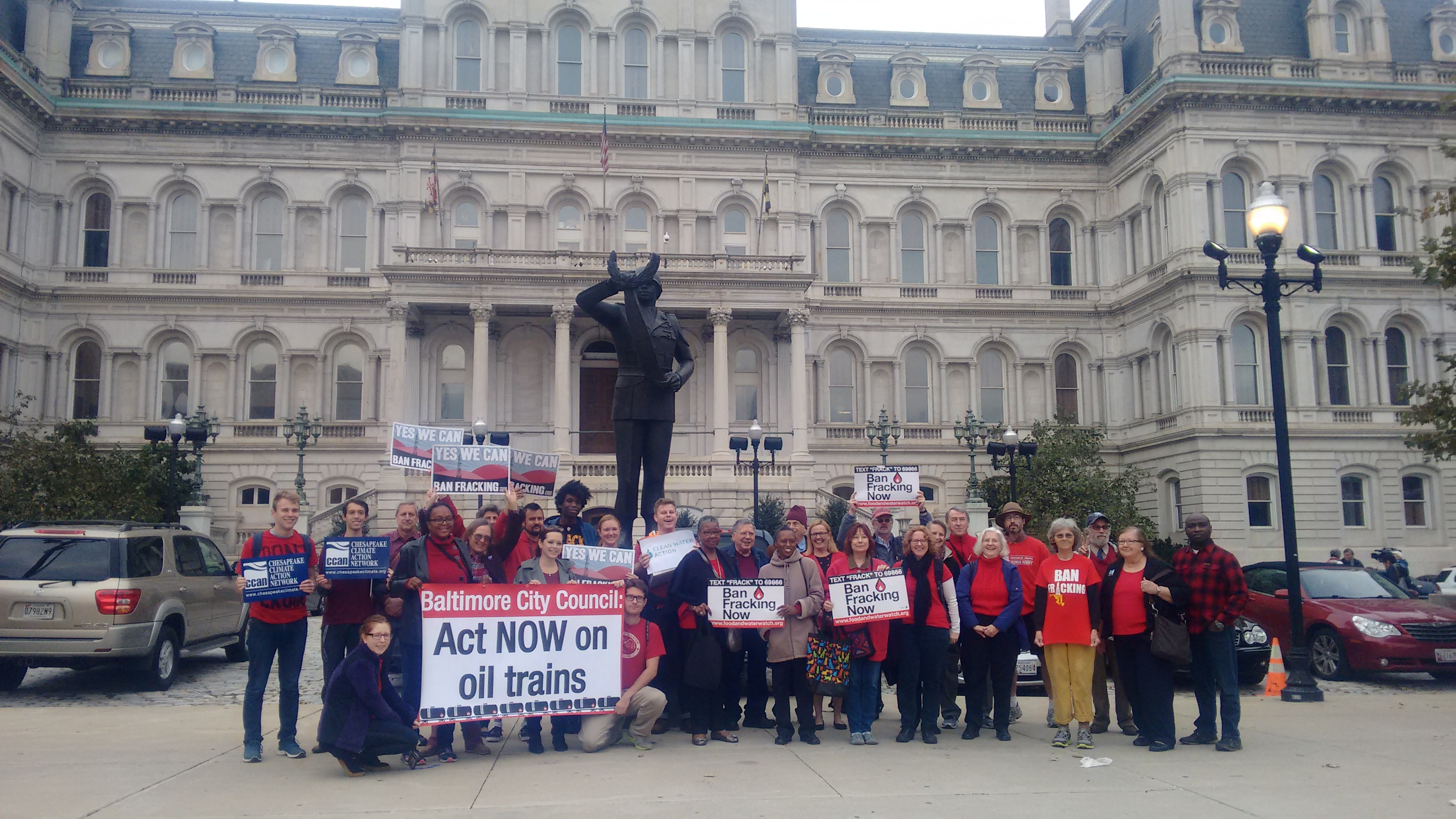 Baltimore residents rally against #crudeoiltrains - but no progress on safety bill

"I don't want to be sitting here when something happens and we didn't do everything we could possibly do to prevent it."

With those words, Baltimore City Councilwoman Mary Pat Clarke expressed her dismay that the Oil Trains Ordinance - a bill requiring the city to study the health impacts and risks of the crude oil trains that travel through Baltimore - would not even be receiving a vote at its public hearing last Tuesday.  Due to legal questions that could have been addressed when the bill was introduced eleven months ago, but weren't raised until last week, the Council's Judiciary Committee chose not to recommend the bill to the full Council for a vote.

Over 30 Baltimore residents had come to City Hall to support the bill.  In a show of the importance and urgency of addressing explosive oil trains, 16 people stayed three hours past the scheduled start of the hearing to testify, despite knowing the bill would not move forward this year.  Legal experts, public health experts, parents of children who attend school next to the tracks, and people who live just yards away all shared why they believe Baltimore must take proactive steps to protect itself from this threat.

Clean Water Action has been working with Baltimore residents and coalition partners for more than two years to address the explosive and volatile trains carrying Bakken crude oil through Baltimore.  We defeated a proposed export terminal earlier this year, rallied when hazardous trains derailed downtown, and pressured the Council to hold this week's hearing at all.  Tuesday's hearing was a disappointing set-back, but we're heartened by Councilwoman Mary Pat Clarke's pledge to bring advocates and city departments together to address shortcomings in this bill and introduce a better one in the new year.

Watch coverage of the hearing from CBS, read about it on the Baltimore Brew, see the testimony we delivered on Tuesday below, and contact us if you want to help.  We won't stop until we #stopoiltrains.

Testimony on Bill 16-0621, an Ordinance concerning Transport of Crude Oil by Rail

Good morning.  My name is Jennifer Kunze, and I’m the Maryland Program Organizer for Clean Water Action, a grassroots environmental nonprofit with over 8,000 members within Baltimore City.  We work for swimmable, fishable waters in Maryland, for safe and affordable drinking water, and for environmentally healthy communities; we have been working to understand and address the risks and impacts of crude oil train shipments through Maryland for over two years.  Our membership is gravely concerned about the human and environmental risks that oil train shipments cause.  Our members have written over 500 hand-written letters, which we have brought with us today, and sent over 600 emails over the past year urging you to take action to protect our communities from oil trains.  The best and most timely means the Council has to do so is to pass Council Bill 16-0621.

The Council’s informational hearing on crude oil trains in July 2015 revealed the many safety hazards of crude oil train shipments, and led directly to this bill’s call for comprehensive risk and health impacts assessments. Shipping Bakken crude oil, known to be highly volatile and explosive, by rail is a new and dangerous practice that has caused a sobering number of spills and explosions across the continent in the past four years.  Baltimore is especially vulnerable because these trains run just yards from people’s homes, businesses, and playgrounds, with multiple at-grade crossings and curves where incidents are most likely – not to mention that trains have derailed since crude oil started coming through Baltimore.  For example:

More than 165,000 people in Baltimore City could be impacted by an oil train explosion.  We cannot continue to see crude oil trains traveling on Baltimore’s rails without fully understanding and preparing for the consequences, and so we must conduct a comprehensive Risk Assessment and incorporate the results into the Planning Department’s All Hazard Mitigation Plan and other emergency preparedness documents.

Aside from the risk of a catastrophic explosions or spills, the presence of oil trains in Baltimore brings profound public health risks.  Crude oil experiences “shrinkage” during shipment: up to 3% of its volume evaporates into the air surrounding the trains.  This air pollution consists mainly of toxic volatile organic compounds, including dangerous human carcinogens like benzene.   Especially as crude oil trains travel through communities in South, West, and East Baltimore already affected by life-threatening pollution, this additional burden cannot be dismissed.  To fully appreciate understand this risk, as well as the human health impacts a crude oil train spill and explosion would cause, Baltimore City must conduct a Health Impacts Assessment.

Crude oil shipments by rail also put our local environment at risk, particularly our water resources and city infrastructure.  In the event of a derailment and spill or explosion, crude oil would flow downhill to the nearest waterway.  For example, in April 2014, a train derailed and exploded in Lynchburg, sending several tanker cars directly into the James River; downstream, the city of Richmond had to shut down their water intakes.  In Baltimore, the trains travel directly over the Patapsco River, the Jones Falls, the Gwynns Falls, Herring Run, and Back River; an incident at any of those places would send flaming oil into those waterways and onward toward the Inner Harbor and the Chesapeake Bay.  Advocates and city, state, and federal agencies are making great strides toward improving Baltimore’s water quality and addressing the significant problems with our sewer and stormwater infrastructure, and a crude oil train derailment would put this progress at risk in unmeasured ways.  Also, the complications of our urban environment make the threat of a spreading oil spill even greater, as oil spilled at- or above-grade would flow into our storm drains and into our stormwater network.  This network would carry it beneath our streets, next to vulnerable drinking water and sewage pipes and other vital city infrastructure, which is already damaged enough to cause sinkholes throughout downtown Baltimore and sewage spills during any heavy rain.  For this reason, it is especially imperative that Baltimore City, out of all of the jurisdictions that oil trains threaten in Maryland, take special care to fully understand how a crude oil train disaster would be compounded by our complicated urban environment.

Finally, although federal agencies are responsible for regulating rail traffic, Baltimore City needs to take proactive steps to protect itself, because those federal regulators are not acting quickly enough.  On October 14, the Office of Inspector General released an audit report they conducted of the Pipeline and Hazardous Materials Safety Administration (PHMSA), a federal agency charged with overseeing 2.6 million miles of pipelines and nearly 1 million daily hazmat shipments, including crude oil trains.  The report was titled “Insufficient Guidance, Oversight, and Coordination Hinder PHMSA’s Full Implementation of Mandates and Recommendations.”  It found that the agency blew past deadlines for issuing rules to address oil train safety and spill response.  Since 2005, the PHMSA has failed to implement one-third of its mandates to issue rules protecting people from hazardous shipments, and has failed to resolve over half of the recommendations of the National Transportation Safety Board (NTSB) – including one to lower the threshold for spill response plans for trains carrying highly flammable oil.  Meanwhile, the NTSB includes the completion of rail safety initiatives in its 2016 “Most Wanted List,” specifically citing crude oil trains.   Since our federal regulators have been slow to act to address the crude oil train crisis, Baltimore City must take proactive steps to protect its own citizens.  One important step is to conduct our own Health Impacts and Risk Assessments to ensure that if the worst were to happen, we would be prepared.

For all of these reasons, Clean Water Action urges the City Council to pass Bill 16-0621 so that our city can fully understand the health impacts and risks of crude oil trains.