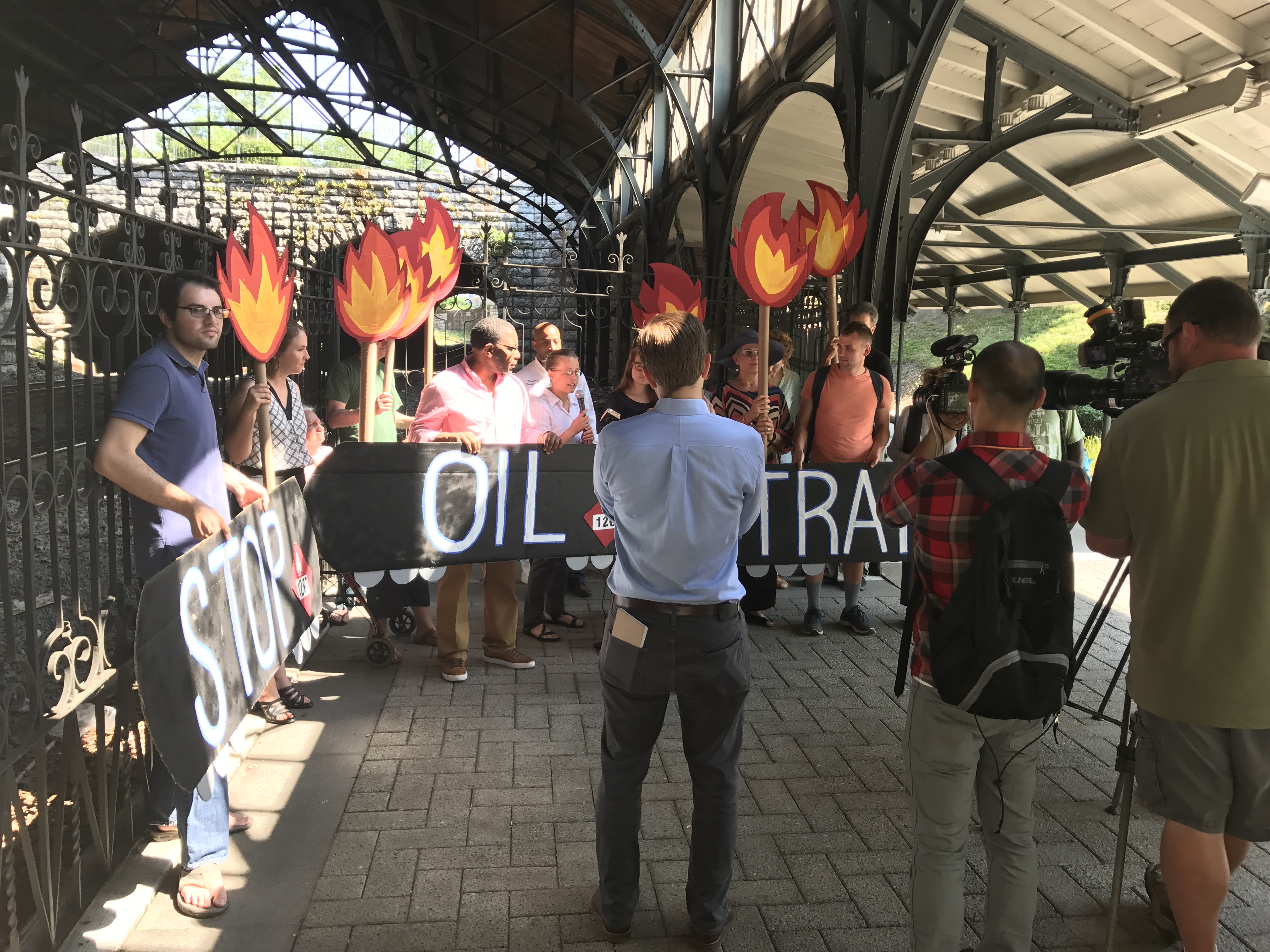 One year ago today, I was woken up by texts letting me know that a train had derailed in downtown Baltimore and asking me if I knew what was going on.  I had been working to fight crude oil trains for almost two years then, so I knew what might have happened if the train cars that had derailed had carried crude oil: an explosion and fire that would have killed community residents in their homes, damaged the campuses of the University of Baltimore and the Maryland Institute College of Art, and changed the face of Baltimore.  Fortunately, the cars carried liquified petroleum gas vapors and acetone, and none of them punctured, so the derailment was cleaned up without incident (but with a lot of disruption to public transportation, traffic, and university activities - read more on our blog).  But it was only chance that the derailment last year didn't end in disaster - and we can't leave the safety of Baltimore up to chance.  (Sign the petition today!)

This morning, over 20 Baltimore residents, elected officials, labor representatives, and professors gathered at the site of the derailment on MICA's campus to issue a call to action.  Valeska Populoh, professor and chair of the Fiber department at MICA, spoke about the impact that last year's derailment had on her department last year (blocking her and other professors from accessing their offices and studio space for almost a week!): “The incident has raised my concerns about the transport of hazardous materials on these rail lines so close to our campus and the surrounding community, the potential threats to health and safety that these pose, as well as the potential for disruption of traffic and daily life in this central part of Baltimore in the event of another derailment.”

David McClure, President of the Amalgamated Transit Union Local 1300, spoke about the proximity of the crude oil train route through Baltimore to the light rail and bus routes, whose operators he represents: “Each day our 2,500 MTA workers transport the people of Baltimore to work, school, the doctor, or wherever they need to go. And our riders’ safety is our number one priority. I repeat, it’s our number one priority. And now it’s time for the City Council to put the safety and health of the people first.  It’s time to put a stop these trains from carrying dangerous crude oil and other hazardous cargo travelling through these densely-populated neighborhoods before we have a disaster on our hands.”

Ulysses Archie, the father of five children enrolled in Baltimore City public schools, spoke about the 40 schools within a mile of the crude oil train route through Baltimore and the unacceptable risk to children's safety that entails: "Today is the last day of school for children across Baltimore, and I plan to pick my children up from school at 12:30 today.  But when disaster strikes, that isn't something you can count on.  And that's not acceptable for our kids."

Finally, Councilwoman Mary Pat Clarke, representative of District 14 which is almost entirely within the blast zone in Baltimore, spoke about the urgent need for the City to take action.  “Crude oil transport through Baltimore is a dangerous venture. At the least, our residents require State and local coordination to secure better notice of such transport, more secure carriers than now employed, and a concerted plan of prevention and response to potential accidents.”

In the past year, port cities like Baltimore across the country have seized the reins to control crude oil train infrastructure development: not only to protect their own communities from the risks of oil spills and explosions, but also to discourage continued extraction of some of the dirtiest oil on the planet after President Obama lifted the 40-year-old crude oil export ban a few years ago.  If companies drilling in North Dakota can't get their oil to markets abroad, they'll drill less of it, so port cities willing to cut off transfers of crude oil from train to boat can slow their shipments and decrease their profits.  And with the prospect of more drilling and less regulation under the Trump administration, communities need to seize any tools available to fight climate change.

Earlier this month, the Whatcom County Council in Washington State voted to halt any new crude oil export facilities on their industrial area of Cherry Point.  In the face of proposed and potential projects that could more than triple the carbon emissions of the entire state of Washington, this temporary moratorium will allow the county government to explore “legal ways the county may choose to limit the negative impacts on public safety, transportation, the economy and environment from crude oil, coal, liquefied petroleum gases and natural gas exports."  Says Barry Buchanan, the County Council chair, "We are determined to use whatever legal tools we have to address climate change and to protect good refining jobs.  Who knows what kind of things are going to be coming at us with all the relaxed environmental regulations ... But we are determined to be the last line of defence. We are going to give it everything we have got.”

Baltimore, as the westernmost East Coast port city with an important and growing role in international shipping, can weild a lot of power if our local government is willing to seize it.  By following in Whatcom County's footsteps and working to prevent future crude oil train exports through the Port, we can not only protect our own neighborhoods and the safety of communities threatened by crude oil trains across the country, but also take a meaningful stand against climate change.  And under a federal administration that's questioning the science of climate change and pulling out from the Paris Climate Accords, it's these local actions that will help us keep oil in the ground.  Sign our petition to urge the City Council to act!