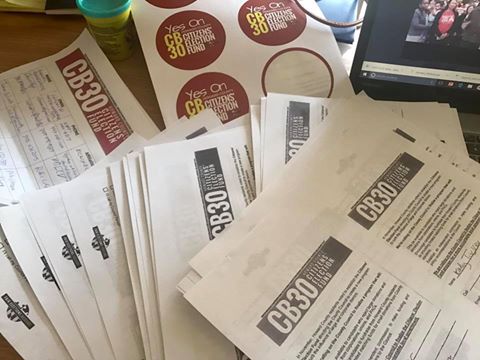 On Monday night, the Howard County Council overturned Kittleman’s veto, and we now have a Citizens’ Election Fund (CB30) to enable candidates to run without deep pocketed special interest money.

Why does Clean Water Action care about how elections are funded?

CB30 makes it possible for candidates to run for office without courting large dollar amount donors. In fact, it forbids participating candidates from getting donations over $250 from any individual. That means that candidates can campaign to the general public, not a couple of wealthy donors.

We believe that democracy is stronger when candidates can run without soliciting money from deep pocketed interests. These candidates will not be expected to cater to a few, but instead to the broader community. Yes, we have some great candidates and politicians now, but it is a major step forward to have candidates that don't have the shadow of special interest money over them.

We love CB30 because it is Howard County’s way of investing in democracy. So many residents complain about the influence of money in politics - this program allows candidates to run on their merits, with broad, community support instead of deep-pocketed, private support.

Candidates still have to do a lot of fundraising before they’re eligible for the fund - to prove that they're real, viable candidates that have significant community support. To run for county executive, candidates need 500 qualifying contributions from county residents, and those running for county council need at least 125.

But why couldn't it have just been a voluntary fund?

Voluntary funds (like the state Fair Campaign Finance Fund) don't accrue enough money to make the program sustainable. Maryland's Fair Campaign Finance Fund, funded by voluntary “check offs” on state income taxes, has slowly accumulated money for the last twenty years. But two campaigns in 2014 (including Governor Hogan’s successful bid), depleted the fund so much that it would not have been available for the next candidate. Fortunately, Governor Hogan replenished the fund in his budget, investing public money in a system that allows a candidate not beholden to the state party system or with access to major donors to run a competitive campaign.

The state campaign fund was not sustainable - despite twenty years of voluntary checkoffs. That is why it is so important that Howard County directly invests in the Citizens' Election Fund.