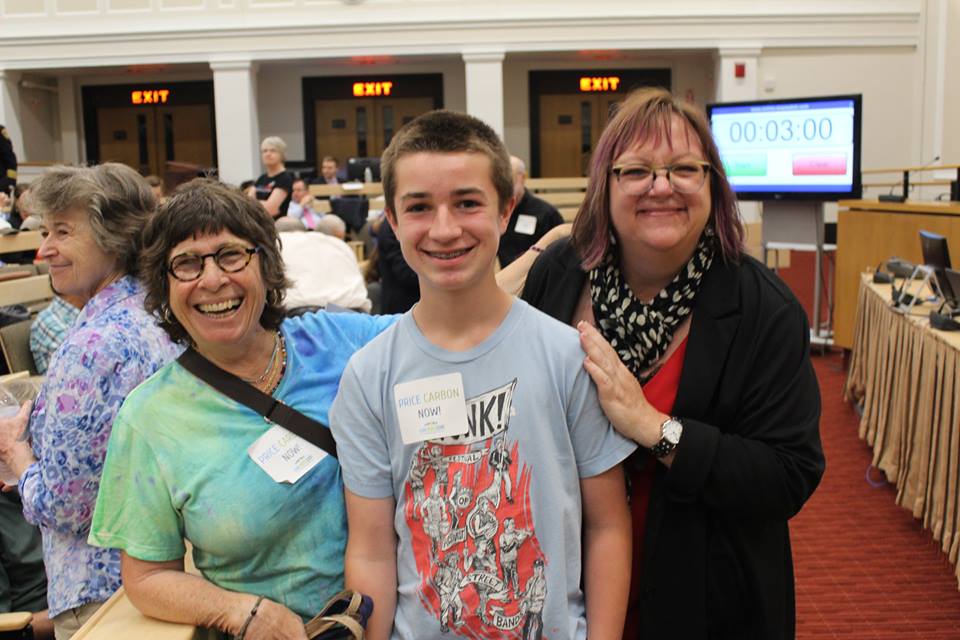 Lynn Nadeau: Get informed and speak out!

This is the fifth in a series of interviews with Clean Water Action Massachusetts Advisory Board members. Photo: (L to R) Lynn Nadeau, her grandson, and New England Director Cindy Luppi at a carbon pricing bill hearing.

Lynn Nadeau is an enthusiastic supporter of Clean Water Action and its work. She is a retired math teacher, and loving grandmother, who now spends her time volunteering for organizations that satisfy her desire for better governmental policies through public education and involvement through legislative and regulatory means. In addition to being on the Clean Water Action Massachusetts Advisory Board, she is a member of the Marblehead Democratic Town Committee on the board of The Jewish Journal, a biweekly newspaper, co-founder of HealthLink, Sustainable Marblehead, and other nonprofits. She loves to swim in the nearby sea, is a steady reader of newspapers and books, loves to listen to podcasts and is deeply connected to family and a few friends. She tends to speak out.

When and how did you first get connected with Clean Water Action?

I had a dear friend in my town of Marblehead who died of breast cancer. At her funeral, people bemoaned, “She was so young; she shouldn't have died.” From somewhere inside of me, a sudden urge welled up and I announced without thinking, " I’m going to clean up that power plant!" (Truthfully I had never consciously thought about that power plant in Salem, but it must have been in my sub-conscious.) At the same time, I learned that Cindy Luppi from Clean Water Action was working on a campaign to clean up 5 coal plants in Massachusetts and we could sign on to Clean Water's campaign. Cindy informed us, guided us and supported us in starting our own nonprofit, HealthLink, to require the power plant to meet clean air standards and generally to be concerned with poisons in our environment.

Through demonstrations, attendence at hearings, public meetings, and a slew of tactics involving the public, we changed the regulations so that these power plants had to meet clean air standards. The owners of the Salem power plant decided that they wouldn't make it cleaner, sold the plant and shut it down. This work was over a span of 20 years, and kept us busy starting in 1997.

What inspires you to be on Clean Water Action’s Advisory Board?

I admire Clean Water Action, its goals and methods, and am gratified to be able to add my energy to the effort.  I am impressed with the way Clean Water fights for robust democratic involvement and in the decision making as well as the action.

What gives you hope about the future?

The young people I know who notice the world around them and become activated for change. I like seeing young people say, “I can make a difference!”  We all are needed to add our energy for a better world. Speaking out and getting people aware and involved is really important. I’m so pleased that I've influenced the youngsters in my family to care about the world. Young people I know are studying sustainability and environmental science. This is wonderful! When I see Elizabeth, Cindy, and everyone else working through Clean Water Action that gives me hope too.

How can young people get involved to influence government policies that directly impact their future?

They need to be informed about what is going on in municipal, state and federal issues. Follow legislation and see where it's going. Learn the issue, participate in the work, and talk about it. Don’t let people get away with passivity and not noticing what needs to be done.

What is something you have learned as a member and volunteer of non-profits?

The courts really make a huge difference. All three branches of our government make a difference of course--the laws, the executive decision-making, and the judiciary system. With the power plants, we got the governor to decide that there should be laws that regulate mercury, carbon dioxide and nitrous oxide. And we also needed legal advice and lawsuits when there were violations of the law. When you take action, there are so many different paths you can take and systems you have to operate through to get to the goal you want. You must drum up popular support, and with that support you need to talk to elected officials, and sometimes go to the court.

How did your career as a teacher influence your decision to get involved with volunteer work?

I taught calculus and geometry and I loved it. The reasoning and logic in math was a relief from the nuances of complex political and ethical questions. It was also frustrating to be a math teacher and have to stick to the curriculum. I didn't talk to my students about contemporary issues. I had trouble balancing my concern for the public good and devote each class to only the required math curriculum. So in a way I was relieved when I could stop teaching, and I could become the person I always wanted to be—an activist for public good.

What is something you wish the next generations of activists, including your grandchildren, to know about your work?

Individual actions influence others who know you, but public policy is what makes the difference. We have to change public policy. The work of Clean Water Action is more than just living a life where you pick up pieces of paper on the beach, you have to plan ahead and think about policies that prevent the cigarettes from being on the beach at all.

You mentioned that you like to “speak out”. What are you currently speaking out against?

I always think to myself: if you see something, say something. I'm blunt. I am on the Board of a Jewish newspaper, and I speak out for two states for two peoples in Israel-Palestine. I speak out about Carbon Pricing. I go to hearings and testify for the Benson Bill. I work with the Democrats, and just called the Chair of Massachusetts Democrats to lobby for a debate dedicated to climate change. In my local community I got a piece of land donated to the public for a seaside park so that people of all abilities are able to enjoy the ocean. It’s nice being around people who agree with me and work alongside me for a better world. But every now and then I have to go into a hostile environment to talk to those that don’t agree and try and get them to think about what kind of world we really want. So there’s small scale work, like the little park, or larger scale, like the climate emergency and I need to have a balance so I don’t drive myself crazy.

Is there anything else you wish to add?

I do feel that I am grounded in my values. In my long life, the most important matters to me are: 1. my own joy, 2. my contributions to my family and close friends and 3. weighing in on public policy. That's how I organize my life!