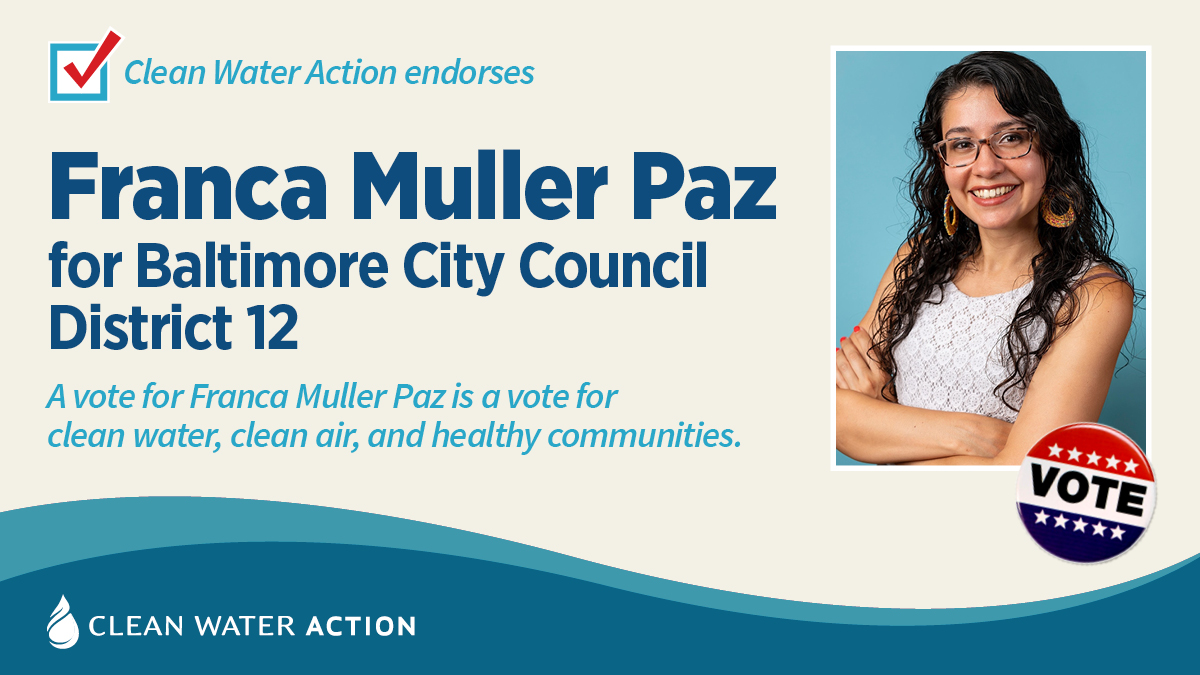 Ballots are arriving in mailboxes across Baltimore City as we speak, and as a country we face enormous challenges and choices between now and the November elections. But whatever happens at the federal level, Baltimore will be more equipped to face it with leadership in City Hall that prioritizes protecting public health, dismantling inequitable city policy, working closely with constituents, and building community power. That's why Clean Water Action proudly endorses Franca Muller Paz for Baltimore City Council District 12.

Franca Muller Paz is a ten-year Spanish teacher at Baltimore City College, a three-term elected Building Representative in the Baltimore Teachers' Union and leader in the Baltimore Movement of Rank and File Educators, a longtime advisor to the youth organization Students Organizing a Multicultural Open Society (SOMOS), and a member of the Green Party. Her strong progressive platform is centered in community-centered public safety, education reform, ending systemic racism in city government, digital equity, COVID-19 relief, and immigrant advocacy.

Muller Paz is a strong supporter of the environmental and public health measures necessary to build a future where everyone in Baltimore City can thrive. Pledging support for zero waste policies, fossil fuel divestment, improved transit policies and local control of our transportation system, and future fights against polluting infrastructure, she promises to be a strong and vocal ally on the City Council. And as a teacher with direct experience with the environmental inequalities that make it harder for Baltimore students to succeed - asthma is the #1 cause of children missing school in Baltimore, with unhealthy school building infrastructure and housing conditions, emissions from cars and buses, and contribution from big polluters all playing a part - she'll be able to lead on city policies to improve conditions for Baltimore's students.

We're not alone in recognizing Muller Paz's strong campaign: she's already been endorsed by Sunrise Movement Baltimore, Bikemore, Sierra Club, Democratic Socialists of America, Greater Baltimore DSA, Our Revolution Maryland, Baltimore City, and Baltimore County, CASA in Action, Metropolitan Baltimore Council of AFL-CIO, Baltimore Women United for Action, Progressive Maryland, and District 12 Democratic Primary candidates Dave Heilker and Gary Crum. Muller Paz's campaign is a demonstration of the fresh energy and community-centered ethos she'll bring to City Hall. Even during the pandemic, she's mounting an energetic campaign, powered by small-dollar donations (but still raising over $47,000!) and activated by tons of grassroots volunteer power (including many of her former students).  In her interview with us, she spoke about how she sees a City Council seat as an opportunity to listen to her constituents and bring people into City Hall (literally or virtually) to craft policymaking and governance. That kind of leadership will help build a stronger, more resilient Baltimore. If you're a resident of Baltimore's District 12, we at Clean Water Action hope that Franca Muller Paz will have your vote!

UPDATE: Since our initial announcement, Franca Muller Paz has continued racking up endorsements: from the Baltimore Teacher's Union, the Eastern Atlantic States Regional Council of Carpenters, Progressive Maryland, and community organizer Ralikh Hayes. Check out more about Franca's exciting campaign on WYPR, and help us spread the news on Facebook and Twitter. And if you live in District 12, don't miss the chance to cast your vote for Franca Muller Paz!