The Dangers of Hexavalent Chromium (Chromium 6) in California Drinking Water

This year the California State Water Quality Control Board is expected to establish a new drinking water standard for hexavalent chromium.  Thanks to influence by both industrial polluters and a few water agencies, this standard to protect the public from a potent carcinogen was first delayed and then overturned.  Clean Water Action is working to ensure that the chemical is not only regulated in water, but that the standard is set at an even more protective level than it was previously.

Background on Hexavalent Chromium in California

The movie “Erin Brockovich” alerted the public to the great suffering the little town of Hinkley, CA experienced due to the cancer-causing chemical hexavalent chromium (also known as chromium 6) in its drinking water. While the levels in most other impacted communities are much lower than Hinkley’s, hexavalent chromium was eventually detected in 2475 California drinking water sources, spread throughout 51 out of 58 counties.

On April 15, 2014, California regulators released a final hexavalent chromium drinking water standard of 10 parts per billion (ppb) making this the only government in the U.S. to regulate the chemical in water. While this was a major step, it was not ideal given that the standard was 500 times higher than the level that State scientists determined would not result in significant public health problems and many Californians would continue to be exposed to unsafe levels of this carcinogen, DPH’s decision was primarily based on the costs of water treatment. Learn how drinking water standards are set in California here.

In 2017, public safety faced a major setback when the California Manufacturers and Technology Association sued in the Superior Court of Sacramento over the hexavalent chromium regulation.  Sadly, the court ruled that the standard was invalid because the state “did not adequately document why the MCL was economically feasible”, versus being based on what would protect Californian’s health and safety.  Since then the CMTA has tried to stop other drinking water protections using the same legal strategy, but they have been unsuccessful. 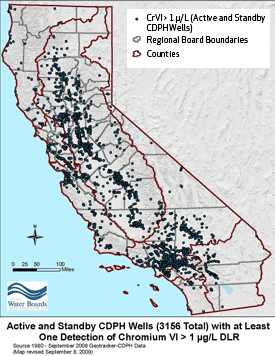 Some water systems chose to treat the hexavalent chromium in their water even without a legally enforceable standard, protecting their consumers   Unfortunately, some communities have failed to do this, meaning that thousands or even millions of Californians continue to be at risk, including children in schools where the water is contaminated and bottled water is unavailable.

The State Water Board is working to reestablish a drinking water standard for hexavalent chromium this year and is in the process of reevaluating the health information, as well as new technologies that could provide treatment at lower costs.

Clean Water Action is working with allied organizations and impacted communities to ensure that this time the standard is both truly health protective and stands up to legal challenges meant to delay or prevent holding polluters accountable.

Where does hexavalent chromium come from?

In addition to natural sources, hexavalent chromium enters drinking water sources through discharges of dye and paint pigments, wood preservatives, chrome plating wastes, and leaching from hazardous waste sites. Not surprisingly, communities near chromium waste disposal sites or chromium manufacturing and processing plants are at particular risk of exposure. Probably the most impacted people are workers exposed on the job.

What are the health effects of hexavalent chromium?

Hexavalent chromium is a carcinogen and a reproductive toxicant for both males and females. As a result, it was added to California's Proposition 65 list of toxic substances (pdf) in December 2008. Exposure to hexavalent chromium occurs through breathing, ingestion, and contact with the skin. Although most of the known health impacts are related to inhalation, there is now strong data linking ingestion of hexavalent chromium, such as through drinking water, to severe health effects. In addition to cancer and reproductive harm, short and long-term exposures can lead to eye and respiratory irritation, asthma attacks, nasal ulcers, dermal burns, anemia, acute gastroenteritis, vertigo, gastrointestinal hemorrhage, convulsions, ulcers, and damage or failure of the liver and kidneys.