Building a Culture of Water Conservation in DFW

Clean Water Fund ramped up efforts in 2017 to promote water conservation in the Dallas-Ft. Worth Metroplex. The region’s population is projected to increase by 91% by 2070, and its demand for water by 71%. Per capita consumption levels in many DFW communities rank among the highest in the state. Texas recommends that cities reduce per capita consumption by at least 1% per year, with the goal of lowering it to 140 gallons per person per day. But few DFW cities are on track to meet these goals, and some even project increases.

Thanks to a generous grant from The Meadows Foundation, Clean Water Fund is promoting proven, cost-effective conservation measures, such as limiting lawn watering to twice a week and nighttime hours, and investing in toilet replacement programs. About half of typical household water use comes from lawn watering, and toilets in homes built before 1994 can account for 20% of indoor use. These older homes are predominant in many suburban communities, creating an easy opportunity to save vast amounts of water through the simple step of updating their toilets. Unfortunately, the water plan for DFW emphasizes environmentally damaging new reservoirs in East Texas that are more expensive than cost-effective conservation initiatives. DFW cannot afford to flush away its water future!

How Does Your City Rate on Water Conservation?

Many DFW communities offer only minimal assistance to residents who want to save water in their homes. Check out your city’s water utility online to see if it limits when and how often lawn watering occurs, helps pay for replacing outdated plumbing fixtures with modern toilets and faucet aerators, offers no-cost irrigation audits, provides discounted rain barrels, and promotes native landscaping. If one or more of these programs are missing, contact your city council member and ask them to support creating them. These initiatives can help keep water rates in check while conserving water for the environment and human needs. Your grandchildren will thank you!

A new report from Clean Water Action sheds light on ‘Enhanced Oil Recovery’ (EOR), an increasingly common technique used to bring oil and gas to the surface. Texas is second only to California in its number of EOR wells, and the two states account for about half of EOR wells nationwide. Like hydraulic fracturing or ‘fracking’, EOR is poorly regulated and its impacts on underground sources drinking water are largely unknown. This needs to change.

Both fracking and EOR rely on injection of (in most cases) water to coax oil and gas through fissures in underground rock formations so the product can be brought to the surface. Fracking creates these fissures through the pressurized injection of water, sand, and toxic chemicals; EOR exploits these pathways where they already exist, often due to prior fracking activities.

Wink Sink #2, Texas, 2011. Two large sinkholes formed in June 1980 and May 2002 near the communities of Wink and Kermit in western Texas. These “Wink Sinks” were 110 meters and 137 meters across at their formation, respectively, and have grown since then. They were caused by salt dissolution and collapse as a result of water movement through water wells supplying waterflooding operations.

EOR accounts for about 60% of all crude oil production in the US today, and about half of EOR wells employ ‘waterflooding.’ As the name implies, waterflooding injects water loaded with chemical additives into underground formations to push the petrochemicals into an existing oil well for retrieval.

A major drawback to both EOR and fracking is their potential to pollute underground sources of drinking water (USDWs). A USDW is defined as an aquifer of up to 10,000 milligrams per liter of total dissolved solids — a measure of salinity. Under federal law, EPA is supposed to protect USDWs from pollution from injection. EPA delegated oversight over oil and gas injection activities to the Texas Railroad Commission in 1982, with the understanding that the Commission would seek special permission from EPA anytime the industry wishes to inject into a USDW. Unfortunately, Texas has never tracked injection into USDWs, let alone asked EPA for permission to allow it, putting an untold number of USDWs at risk.

Clean Water Action is calling on EPA and states to authorize independent studies of the effects of EOR on groundwater, and to increase funding to monitor and protect USDWs. Sadly, at the very time EOR wells are proliferating, the Trump administration wants to slash EPA’s budget for protecting groundwater—along with other water protections. EPA would then have even less funding to pass on to states like Texas. Here, as elsewhere, the administration is putting the interests of the oil industry above the public interest.

Take Action: We cannot afford to allow the oil industry to continue playing Russian Roulette with our drinking water. Please contact your U.S. Senators and Representatives today and urge them to reject cuts to EPA’s budget and fund the protection of underground sources of drinking water!

In order to meet the demands of a growing population and soften the impacts of recurrent drought, Texas is investing in desalination of brackish groundwater. The legislature has also directed the Texas Water Development Board to map and characterize USDWs, with their potential use as a water supply in mind. Learn more about these important developments here.

Clean Water Action joined with Resilient Nacogdoches, local groundwater districts, the Sierra Club, and more than 170 concerned residents this September to persuade the Texas Commission on Environmental Quality to deny a permit for a so-called “landfarm” just outside Nacogdoches. A landfarm theoretically disposes of oil and gas drilling waste by mixing it with soil and spreading it on open fields. This particular landfarm would have been sited near a tributary of Lake Sam Rayburn, a major drinking water supply for the region. Drilling waste contains arsenic, lead, and other heavy metals that can leach into groundwater, as well as volatile organic compounds and toxic chemicals that can become airborne. Landfarms have been shown to pose serious risks to public health and the environment.

As Clean Water Action’s Rita Beving put it, “This land farm was to be located in an area that flooded seven times in 12 months between January of 2016 and 2017, and numerous times in 2015. What was this applicant thinking when they chose this location?” Although the public won an important victory over polluters in this case, numerous other land farms continue to operate here, a demonstration of the clout oil and gas drillers continue to enjoy in Texas.

Thanks in part to timely emails, letters, and phone calls from Clean Water Action members, the Texas Legislature left intact protections for trees that over fifty cities in Texas have put in place. Lobbyists for developers have been trying to overturn local tree protections for years, and Governor Greg Abbott made destroying them a top priority of the special session he summoned to Austin in July. Fortunately, the legislature as a whole recognized that local governments know best how to protect trees within their jurisdiction, especially in a state like Texas with its stunning variety of climates and regional flora.

Cities have long recognized the multiple benefits that mature trees provide. They include reducing the need for irrigation by shading plantings beneath their canopy; absorbing and holding rainwater, which reduces stormwater runoff that threatens downstream neighbors; shading homes and businesses, which reduces energy costs and provides habitat for birds and other species; removing pollutants from the air; and improving property values. Not least, trees bring nature back into our growing cities, providing much-needed places of repose and beauty that numerous studies have shown have important health benefits for people. We thank you for joining us in standing up for the trees! 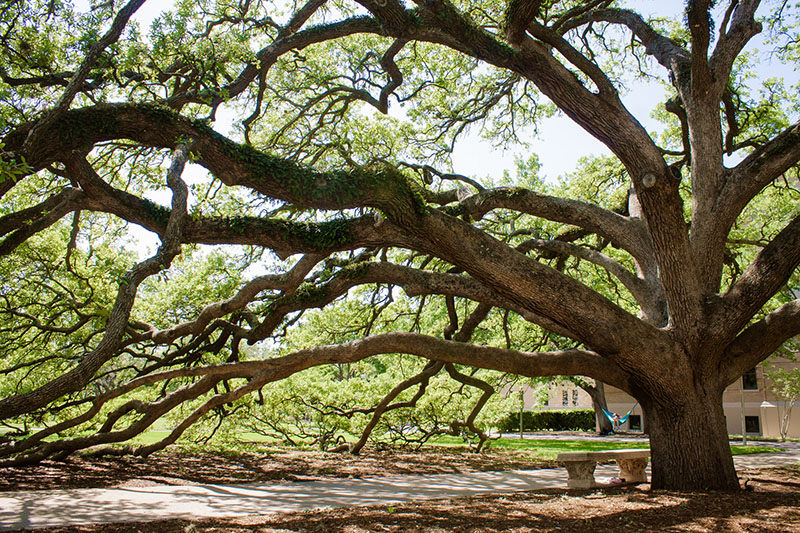 Austin’s ‘Water Forward’: The Next 100 Years

The City of Austin is approaching the end of a long process called “Water Forward” to put together a plan on how to meet its water needs for the next 100 years. The city is now soliciting public input on the suite of options Water Forward has identified. These range from bringing in water from distant aquifers to decentralized approaches like capturing rainwater on a massive scale in underground cisterns and using it for adjacent buildings.

Climate projections call for increasingly hot temperatures and longer periods of drought punctuated by intervals of heavy rain — exactly the pattern we have been experiencing. Higher rates of evaporation will limit the ability of reservoirs to meet our needs. It is imperative that Austin prepare for this “new normal.”

Decentralized approaches can help make Austin resilient to this changing climate. New office and apartment buildings can use air conditioning condensate and rainwater to flush toilets and irrigate landscapes. Subsurface cisterns can capture stormwater to reduce flooding and augment supply. New multi-family and commercial developments should be required to meet their irrigation needs with non-potable water captured onsite or delivered by the city’s reclaimed water system.

It is important that you make your voice heard on Water Forward! Learn how to weigh in here.

What Hurricane Harvey Should Teach Us

We remain deeply saddened by the tragic flooding that Hurricane Harvey inflicted on Houston and nearby communities. Humans can never completely prevent flooding, but sound policy can soften its blows. Our leaders should acknowledge that continued burning of fossil fuels increases the intensity and frequency of storms. Policy makers should understand that gutting the Clean Water Rule makes it easier for developers to pave coastal wetlands, forcing more water into people’s homes when hurricanes strike.

Clean Water Fund is a proud member of EarthShare of Texas, a network of environmental organizations working to protect our natural resources and human health. Many employers offer green giving options, and fall is the time to enroll for these payroll contributions. Learn more at www.earthshare-texas.org